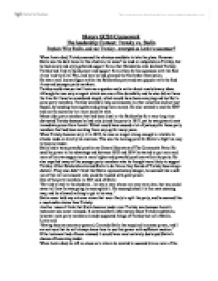 History GCSE Coursework The leadership Contest: Trotsky vs. Stalin Explain Why Stalin, and not Trotsky , emerged as Lenin's successor? When Lenin died, Trotsky seemed the obvious candidate to take his place. However Stalin was the dark horse in this situation, he wasn't as loud or outspoken as Trotsky, but he had slowly and slyly gathered support from other Bolsheviks who disliked Trotsky. Trotsky had tried to build power and support from others by his successes with the Red Army and the Civil War, and how he had planned the November Revolution. He was a well known figure within the Bolsheviks party and was popular with the Red Army and younger party members. Trotsky could always rival Lenin as a speaker and a writer about revolutionary ideas. ...read more.

Stalin had a very powerful position as General Secretary of The Communist Party. He used his power to his advantage and between 1922 and 1924 he started to put more and more of his own supporters in more higher and powerful positions within the party. He also expelled many of the younger party members who he thought were likely to support Trotsky. Other Bolsheviks allowed Stalin to do this as they feared of Trotsky becoming a dictator. They also didn't think that Stalin represented any danger, he seemed like a safe run of the mill communist who could be trusted with great power. One of the party members in 1924 said of Stalin 'He tried to stay in the shadows...he was a man whose aim was very clear, but you could never tell how he was going to accomplish it. ...read more.

It was decided that the member of the Politburo that had the most power would succeed Lenin, but instead of having leadership elections which would have been more fair the Communist Party did not want it to work that way. The two leading figures that would fight for power would be Stalin and Trotsky. Lenin's funeral was held on the 27th January 1924. Stalin made an appearance as chief mourner and Lenin's closest friend, but Trotsky was nowhere to be seen. It was later revealed that Trotsky had been tricked by Stalin, and given the wrong date and time for the funeral, so as took look as if Trotsky did not really care for Lenin. This also made Stalin look better as it made him seem like the caring friend that he should be. ?? ?? ?? ?? ...read more.