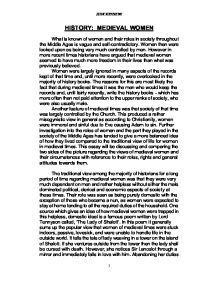 HISTORY: MEDIEVAL WOMEN What is known of women and their roles in society throughout the Middle Ages is vague and self-contradictory. Women then were looked upon as being very much controlled by men. However in more recent times historians have argued that medieval women seemed to have much more freedom in their lives than what was previously believed. Women were largely ignored in many aspects of the records kept of that time and, until more recently, were overlooked in the majority of history books. The reasons for this are most likely the fact that during medieval times it was the men who would keep the records and, until fairly recently, write the history books - which has more often than not paid attention to the upper ranks of society, who were also usually male. Another feature of medieval times was that society of that time was largely controlled by the Church. This produced a rather misogynistic view in general as according to Christianity, women were immoral and sinful due to Eve causing Adam to sin. Further investigation into the roles of women and the part they played in the society of the Middle Ages has tended to give a more balanced idea of how they lived compared to the traditional view of life for women in medieval times. This essay will be discussing and comparing the two sides of the picture regarding the views of medieval women and their circumstances with reference to their roles, rights and general attitudes towards them. ...read more.

dead to the world and could not inherit property or money; senior positions were closed to women - with the exception of becoming Queen. Even within a village where woman would do much of the same tasks men did on the land, albeit on top of her domestic duties, women were paid much less (if at all) than their male counterparts for doing the same jobs. Even though documents regarding the common person from medieval society are rare, some do exist concerning how villages of these times operated, "For reaping, a man could get 8 pence a day. For the same task, women would get 5 pence. For hay making, men would earn 6 pence a day while women got 4 pence. In a male dominated society, no women would openly complain about this disparity" (www.historylearningsite.co.uk). This shows how the laws concerning pay discriminated against medieval women as much as the more conventional laws regarding marriage and inheritance. However, this traditionalist view certainly paints a rather bleak picture of life for women in the Middle Ages, whereas in more recent times historians have looked more deeply into the lives of medieval women and given a revisionist idea of women's roles in these times. These studies have shown women had a greater amount of freedom than had been originally portrayed. Through further examination there has been plenty of evidence to support the fact women did participate fully in these times, and it must also be noted women repeatedly disobeyed these man-made laws. ...read more.

If satisfied that the husband greatly 'underperformed' for his wife then it was perfectly fine for the couple to divorce, "A man and a woman are to be placed together in one bed and wise women are to be summoned around the bed for many nights. And if the mans member is always found useless and as if dead, the couple are well able to be separated" (Terry Jones, The Middle Ages; 2003). Medieval women should not be regarded as uneducated in these times. For Women of the upper classes it was more common that the wives were far greater readers and more educated than their husbands. A number of women actually used their talents to assert themselves as writers, poets, composers and artists. Probably the most remarkable educated female of these times is the poet Christine de Pisan. Not only was she able to earn her living as a writer but due to her arguments with the clergymen on the rights of women, it is said she was the first feminist. As such an educated woman, her views were hard to discard, "She had strong opinions about what she read, and decided it was necessary to challenge the way men were writing about women" (Terry Jones, The Middle Ages; 2003). It must be concluded after examining the evidence for both the traditional and revisionist views of medieval woman that there is plenty of evidence to back up both opinions concerning women of these times. However, it must be noted that just as in society today, from time to time and place to place women's roles varied widely. ...read more.