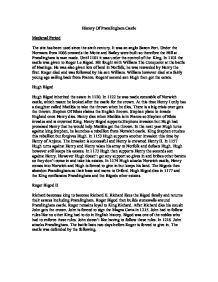 History Of Framlingham Castle Medieval Period The site has been used since the sixth century. It was an anglo Saxon Fort. Under the Normans from 1066 onwards the Motte and Bailey were built so therefore the Hill at Framlingham is man made. Until 1101 it was under the control of the King. In 1101 the castle was given to Roger Le Bigod. HE fought with William The Conqueror at the battle of Hastings. He was also given lots of land in Norfolk, he was rewarded by Henry the first. Roger died and was followed by his son William. William however died at a fairly young age sailing back from France. Rogers' second son Hugh then got the estate. Hugh Bigod Hugh Bigod inherited the estate in 1120. In 1122 he was made constable of Norwich castle, which meant he looked after the castle for the crown. At this time Henry I only has a daughter called Matilda to take the thrown when he dies. There is a big crisis over gets the thrown. Stephen Of Blois claims the English thrown. Stephen plans to invade England once Henry dies. Henry dies when Matilda is in France so Stephen of Blois invades and is crowned King. Henry Bigod supports Stephens invasion but Hugh had promised Henry that he would help Matilda get the thrown. In the next year Hugh turns against king Stephen, he launches a rebellion from Norwich castle. King Stephen crushes this rebellion but forgives Hugh. In 1153 Hugh supports another invasion this time by Henry of Anjoue. ...read more.

The last two important words are site and sources this being the site of Framlingham castle at the moment and sources about the castle. So in order to answer the question I must use both of these to come to a good conclusion to the hypothesis. Uses Of The Castle During The Different Time Periods And How Its Been Adapted For These In the medieval period Framlingham castle was used as a basis to attack and defend. There were many things that made Framlingham suited for this. The Anglo Saxons first notices this as they built a fort here. The motte and bailey was added by the Normans to go in keeping with the rest of there castles as the Normans felt this was the best way for quick and easy building of defence positions, you can see the motte and bailey in the site pictures. Roger Bigod II built stonewalls around the site with defence in mind. You can see this for a number of reasons. The walls are very large and thick as stated in source A ' It has walls 4 feet high and 8 feet thick" First off the Crenellation of the top of the wall is a defense feature. The crenellation is made up of merlons and embrasures. A merlon is where there is a gap in the wall and an embrasure is where the wall is raised. You can see this in Sorrel's painting of medieval Framlingham (painted in the 1950's) and also in the site photos I have taken. ...read more.

Each parish had to build a poorhouse where the poor could live and work. There work would be simple like making rope and any money made would go back into the running cost of the poorhouse (this was called indoor relief) Where no poorhouses were built people would be helped in their homes (this was called outdoor beliefs) This is why Framlingham had a poorhouse built there. In 1834 a new poor law passed. Saying that parishes had to come together to make 'union' work. This meant more often then not paupers (poor people) would now have to receive help outside their parish. This meant that buildings that were there for the original poor law were now left abandoned. This is why Framingham's poorhouse stopped functioning. Another important part of this time period was the Victorian attitude to old buildings. During this time Victorians built many new buildings in the gothic style such as the houses of parliament. The Victorians were not very interested in preserving old buildings so many buildings such as castles fell into disrepair. Which is why Framlingham was only used very sparadically In the twentieth century societies with the aims of preserving buildings and sites directly linked with our past were setup. These include "English Heritage" and "National Trust". The tourism industry grew with people becoming paid members of these groups. The profits from the organizations are then used to purchase more sites and restore them thus leading to even bigger growth of the tourism industry. Also at the same time as this history became a larger part in school teaching and so these sites are also used by schools as trip locations and fieldwork. ...read more.