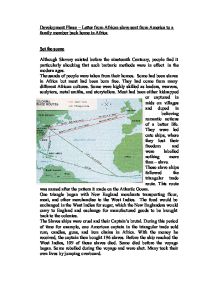 Development Phase - Letter from African slave sent from America to a family member back home in Africa Set the scene Although Slavery existed before the nineteenth Centaury, people find it particularly shocking that such barbaric methods were in effect in the modern ages. Thousands of people were taken from their homes. Some had been slaves in Africa but most had been born free. They had come from many different African cultures. Some were highly skilled as leaders, weavers, sculptors, metal smiths, and storytellers. Most had been either kidnapped or captured in raids on villages and duped in believing romantic notions of a better life. They were led onto ships, where they lost their freedom and were labelled nothing more than - slave. These slave ships followed the triangular trade route. This route was named after the pattern it made on the Atlantic Ocean. One triangle began with New England merchants transporting flour, meat, and other merchandise to the West Indies. The food would be exchanged in the West Indies for sugar, which the New Englanders would carry to England and exchange for manufactured goods to be brought back to the colonies. ...read more.

I wish to [k]now what has Ever become of my Presus little girl. I left her in goldsborough with Mr. Walker and I have not herd from her Since and Walker Said that he was going to Carry her to Rockingham and gave her to his Sister and I want to [k]no[w] whether he did or no as I do wish to See her very mutch and Boss Says he wishes to [k]now whether he will Sell her or now and the least that can buy her and that he wishes a answer as Soon as he can get one as I wis himto buy her an my Boss being a man of Reason and fealing wishes to grant my trubled breast that mutch gratification and wishes to [k]now whether he will Sell her now. So I must come to a close by Escribing my Self you long loved and well wishing play mate as a Servant until death Vilet Lester of Georgia to Miss Patsey Padison of North Caroliner My Bosses Name is James B Lester and if you Should think a nuff of me to right me which I do beg the faver of you as a Sevant direct your letter to Millray Bullock County Georgia. ...read more.

I hav noo cloths and shoos. She is keen to tell her mother of her new and wonderful life because she is proud of it. I am not angry with you becos you didn't help me and helpd mi sister. Jo told me huow it werks. Another reason that she is keen to share her new life with her mother is out of spite, as her mother helped her sister escape but not her. She makes a reference to her owner, Joe, this alienates herself from her mother by idolising someone else. I miss you and him but I am happy he has left me and you and that he has gone. This makes a reference to her father, it implies that she did not like him and shows that although she misses him he must have caused her and her mother great worry. The ladi says I must go. Goodbye love your dorta. This end bittersweet because the person reading the letter doesn't know whether all of the things said were true or whether they were a fabrication of the truth. Does the lay want her to go and work as a slave? Or does she want to show her how to sew more tapestry pieces? [wx1]She first tells her mother that she is happy, so that her won't worry ...read more.