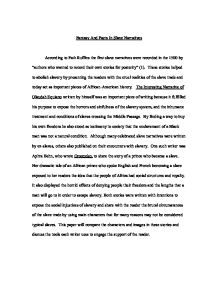 Fantasy And Facts In Slave Narratives According to Fath Ruffins the first slave narratives were recorded in the 1500 by "authors who wanted to record their own stories for posterity" (1). These stories helped to abolish slavery by presenting the readers with the cruel realities of the slave trade and today act as important pieces of African-American history. The Interesting Narrative of Olaudah Equiano written by himself was an important piece of writing because it fulfilled his purpose to expose the horrors and sinfulness of the slavery system, and the inhumane treatment and conditions of slaves crossing the Middle Passage. By finding a way to buy his own freedom he also stood as testimony to society that the enslavement of a Black man was not a natural condition. Although many celebrated slave narratives were written by ex-slaves, others also published on their encounters with slavery. One such writer was Aphra Behn, who wrote Oroonoko, to share the story of a prince who became a slave. Her dramatic tale of an African prince who spoke English and French becoming a slave exposed to her readers the idea that the people of Africa had social structures and royalty. It also displayed the horrid effects of denying people their freedom and the lengths that a man will go to in order to escape slavery. Both stories were written with intentions to expose the social injustices of slavery and share with the reader the brutal circumstances of the slave trade by using main characters that for many reasons may not be considered typical slaves. This paper will compare the characters and images in these stories and discuss the tools each writer uses to engage the support of the reader. The central character of the story is very important in catching and keeping the interest of the reader. Behn's main character Oroonoko is not a regular laboring slave, but a prince whom she describes as a "gallant slave" (2171). ...read more.

Oroonoko is believed to have walked freely around the ship because he was a prince, and possessed such a sense of honour that he would not harm the captain or free the slaves because he promised not to. This is reveals the weaknesses in Behn's position as the narrator because she has not reference to create a realistic view of a slave ship, and her main character must remain honourable or morally superior to his captors in order for him to inspire reader sympathy. The contrast in the two accounts of the slave ships might suggest that although Oroonoko, is a story about a slave, it may not be a slave narrative, but an adventure story that sheds some light on the suffering of slaves. The story of Oroonoko has a fantasy quality to it because it is a romance. Using the universal theme of extraordinary love and beauty the story is able to entertain on a level that Equiano's story may not be. The character of Imoinda, Oroonoko's one true love, is as beautiful and virtuous as him, and she is also sold in to slavery. Her beauty and mannerisms are said to be so perfect that even her owner cannot rape her when he tries because "she disarms [him] with her modesty and weeping" (Behn, p.2195). The incident depicts the slave owner a person who is able to exercise self control and spares the reader the true conditions that had to be endured by female slaves. The framing of the owner and slave in this context also allows the author/narrator a moral ambiguity because it seems that no wrong is done. In contrast Equiano uses the fact that slave women were raped to expose the immorality of the slave owner relationship, and expresses a strong Christian stance on the subject, "I used frequently to have different cargoes of new negroes in my care for sale; and it was almost constant practice with our clerks, and other whites, to commit depredations on the chastity of female slaves" (Equiano, p. ...read more.

In surrendering to their masters it might appear that the slaves are weak and disloyal, but it also displays that these men are human and care about the safety of their wives and children. After the failed mutiny Oroonoko kills his pregnant wife and plans to kill himself, but instead he is grief stricken by the loss of his wife and captured before he can kill himself. This sequence of events may show the reader the desperation of the slaves. The last scene in this story is the graphic as Oroonoko is executed by being chopped into pieces while smoking a pipe. The dismantling of his body may represent the symbolic dismantling of the character and all his abilities because even a talented person becomes useless when they are not free. It also finally demonstrated the true cruelty of the slave owners as many of them took pieces of his body to show their slaves and frighten them into maintaining obedience. The act of storytelling is a powerful force that enables people to share knowledge, preserve cultures, and own their experiences. The power of defining events may act as an integral part of healing as it allows people to frame incidents in their lives where power was taken from them. The process of storytelling can act to heal those have been injured by personal violence or social injustice. Often traumatic acts are unspeakable because those acts are so terrible that they clamp the tongue and subsequently the victim suffers a pain so great that the inexpressibility, the inadequacy of representation, grows and locks the sufferer inside of their suffering. Through writing many people have found the power of being able to preserve a story or share it in order to inform the larger public of the injustices that have been done. Both of these stories may have opened the eyes of their readers and give voices to a group of people who had none. Whether the aim was to inform or entertain, the stories explored many aspects of human strength and cruelty. ...read more.