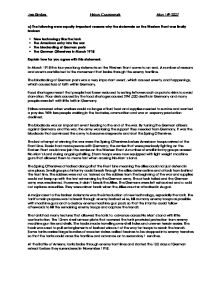 c) The following were equally important reasons why the stalemate on the Western Front was finally broken: * New technology like the tank * The American entry into the war * The blockading of German ports * The German Offensives in March 1918 Explain how far you agree with this statement. In March 1918 the four year long stalemate on the Western Front came to an end. A number of reasons and events contributed to the movement that broke through the enemy frontline. The blockading of German ports was a very important event, which caused events, and happenings, which caused loss of faith within Germany. Food shortages meant that people had been reduced to eating leftovers such as potato skins to avoid starvation. Poor diets caused by the food shortages caused 294,000 deaths in Germany and many people were left with little faith in Germany. Strikes occurred when workers could no longer afford food and supplies needed to survive and wanted a pay rise. ...read more.

The tank's main purpose was to break through enemy barbed wire, kill as many enemy troops as possible with machine guns and to destroy enemy machine gun posts so that the infantry could follow afterwards to kill the remaining enemy troops and capture the trench. The tank had many features that allowed the tank to advance across No Man's Land with little confrontation. The 10mm steel armour plate that covered the tank provided protection from enemy machine gun fire and shells. The tracks made travelling over shell holes and uneven terrain easier. The hook was used to pull entanglements of barbed wire out of the way for troops to reach the trench. Some tanks carried large bundles of wooden stakes called fascines to be dropped into enemy trenches so that the tanks could cross the frontline and advance on to secondary trenches. At the Battle of Amiens, tanks broke through enemy front lines and started the 100 days of German retreat before they surrendered in November 1918. ...read more.

America's entry in the war would have instigated the Spring Offensives, as Germany would want to win the war before American Troops arrived at the frontline. Another example of this is that once America declared war, their Navy could help the British surround Germany so that no supplies could get in, creating a successful blockade. I think that the blockade was the most important part leading to the end of the war. The blockade affected the production of ammunition and weaponry and vital tools. The blockade also turned many Germany citizens against the war and losing support from Germany and losing hope in winning the war and if citizens of a country don't want to support its country during a war then there is nothing the government can do about it. In autumn 1918 Germans turned to mutiny and rebellion. The Kaiser abdicated and the new government (the Weimar Republic) ended the war. In my opinion I think that the blockade was the most important turning point in the allies favour and ultimately led to the armistice in November 1918. ?? ?? ?? ?? Jess Kimber History Coursework May 14th 2007 ...read more.