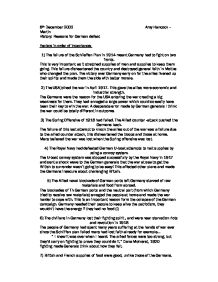 8th December 2002 Amy Hancock-Martin History: Reasons for German defeat Factors in order of importance: 1) The failure of the Schlieffen Plan in 1914 meant Germany had to fight on two fronts. This is very important as it stretched supplies of men and supplies to keep them going. This failure disheartened the country and destroyed general faith in Moltke who changed the plan. The victory over Germany early on for the allies livened up their spirits and made them the side with better morale. 2) The USA joined the war in April 1917. This gave the allies more economic and industrial strength. The Germans were the reason for the USA entering the war creating a big weakness for them. ...read more.

This affected other plans and made the Germans insecure about challenging Britain. 5) The Allied naval blockade of German ports left Germany starved of raw materials and food from abroad. The blockades of Th German ports and the neutral port (from which Germany tried to receive raw materials) enraged the people at home and made the war harder to cope with. This is an important reason form the collapse of the German campaign. Germany needed their people to keep alive the patriotism, they wouldn't have the energy if they had no food (!) 6) The civilians in Germany lost their fighting spirit , and were near starvation riots and revolution in 1918 The people of Germany had spent many years suffering at the hands of war ever since the Schliffen plan failed many had lost faith already for example... ...read more.

9) Germanys allies, the Austro-Hungarians had seen their empire collapse. Austria surrendered on 3 November 1917 Germany had 'lost their right arm' when Austria left the war they lost their financial input and man power; supplies and technology. 10) Germanys allies, Bulgaria and Turkey surrendered in September and October 1918 yet another blow to Germanys finacial; man power; supplies and technology. 11) The British and French armies used 800 tanks in their counter attack in 1918 , The German tank was still in development stage AND The tank made trench warfare out of date. I have put these three factors together as they all are incorporating 1 factor in three parts. In the counter attack against Germany tanks- a creation German were still developing which caused them to become behind technologically- were more effective at gaining land etc. Much more productive than Trench warfare. ...read more.