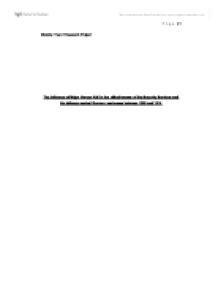 History Research Project. The influence of Major Vernon Kell in the effectiveness of the Security Services and his defence against German espionage between 1909 and 1914

Module: Year 2 Research Project The influence of Major Vernon Kell in the effectiveness of the Security Services and his defence against German espionage between 1909 and 1914 Chapters i. Introduction ii. The Beginnings of the British Security Service (MI5) iii. The Beginnings of German Pre-War Espionage in Britain iv. Pre War Espionage attempts v. The 'Ernst' ring vi. Conclusion i. Introduction "No sane person can deny that England is in grave danger of invasion by Germany at a date not far distant... That German spies are actively at work in Great Britain is well known to the authorities. The number of agents of the German Secret Police at this moment working in our midst on behalf of the Intelligence Department in Berlin are believed to be over five thousand. And today... I am wondering what is to be the outcome of all this organised espionage in England. What will happen? When will Germany strike? Who knows?" (Le Queux, 1909, p.219) For most of the nineteenth century, the United Kingdom had been by far the most powerful country in the world, possessing the greatest empire ever seen. As the end of the century approached, Britain's economic lead over the rest of the world had begun to be eroded. This was because rival countries started to catch up with Britain. The main threat was coming from the east as Japan, France and Russia became more powerful. Britain's 'Achilles heel' can be said to have been the fact that the British Empire spanned over great distance - what historian Paul Kennedy referred to as "imperial overstretch". ...read more.

In fact Germany saw Britain as a potential ally and the German navy even counted on British naval support against France. "As soon as the English fleet can be regarded as hostile to the French, we will only have to focus on Russia in the European theatre." (Boghardt, 2004, p.42) Once Tirpitz joined the Naval Office he changed his mind and explained to the Kaiser that the largest threat was actually from Britain. The extent of German spying in Britain before 1914 was not nearly as dangerous as many British at the time thought. Like the Security Services, the German navy intelligence organisation was relatively small and poorly funded. Boghardt writes about how the German spies were also looking at the wrong things as they were mostly interested in technical information about the Royal Navy and did not pay much attention to the British Expeditionary Forces. We can see that in comparison to the British attempts to combat potential espionage their German counterparts were having similar problems. German spying within Britain produced few tangible results. iv. Pre-War Espionage attempts The idea of espionage had been a concept from an early age. This idea was increasingly beneficial to many authors of this period. William Tufnell Le Queux and Erskine Childers profited from the growing unease with Germany by publishing scare stories in which Germany replaced the traditional enemy, France. It can be said that the absence of spies did not stop the British from perceiving spies. The reasons for the British government's creation of MI5 and MI6 can be said to have been due to the popular pressure contributed by the books by Le Queux and Childers. ...read more.

(www.mi5.gov.uk/output/1909-to-world-war-1) The stance that the British Security Service took comes across as if they succeeded in their efforts to quash German espionage, but what was the reality behind this? The evidence shows arguments from both a German perspective, in Thomas Boghardt, and one from the British perspective in Christopher Andrew. They both evaluate valid points and seem to reach one conclusion that both country's failed to implement the concept of espionage adequately and ultimately failed to make a large difference. Boghardt closes his book by saying, "the history of German espionage in Great Britain reveals a curios double failure: the incapacity of 'N' to make a significant contribution to the German war effort and the inability of British counter-espionage to produce a realistic assessment of German espionage." (Boghardt, 2004, p.143) To say that the establishment of the British Security Service (MI5) was a complete failure would be harsh, as we can see that it clearly helped quash the major expansion of German espionage. If the British Security Service hadn't been created, there was the realistic probability that German espionage would have been a big threat to Britain. In regards to the effectiveness of the Security Service, there are many factors which tell us that Kell's unrealistic forecast of there being an extensive amount of German espionage only helped the expansion of MI5. The mere creation of the organisation can even be said to have caused a deterrent to any possible German espionage from 1909. The pressure from Le Queux and other authors at this time can be said to have been a defining reason for the foundation of the Security Service and also the fever which gripped Britain during this period, of espionage on home soil. ...read more.