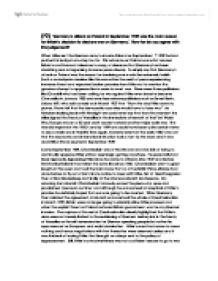 history unit 4 Germany's attack on Poland in September 1939 was the main reason for Britain's decision to declare war on Germany.' How far do you agree with this judgement?

(F2) 'Germany's attack on Poland in September 1939 was the main reason for Britain's decision to declare war on Germany.' How far do you agree with this judgement? When Hitler sent the German army to invade Poland on September 1st 1939 he had pushed his luck just one step too far. This advance on Poland was what caused Britain's and France's tolerance to snap, a tolerance that Germany had been stretching and antagonising for some years already. To simply say that Germany's attack on Poland was the reason for declaring war would be extremely foolish. Such a cataclysmic decision like this was rather the result of years experiencing immense threat and repeated broken promises from Hitler not to mention the genuine attempt to appease him in order to avert war. There were those politicians like Churchill who had been calling for war against Hitler ever since he became Chancellor in January 1933 and even less extreme politicians such as Ernest Bevin, Labour MP, who said as early as in March 1937 that "From the day Hitler came to power, I have felt that the democratic countries would have to face war." As historians looking back with hindsight we could even say that from the moment the Allies signed the Treaty of Versailles in the immediate aftermath of the First World War, Europe was on a 20 year crash course towards another major scale war. ...read more.

Britain was finally ready for fighting a war. For the first time since they started to disarm post WW1, Britain had a reasonable military capability and now was able to commit itself to fighting Germany. The army was by no means at its full strength and the first three years of the war were spent expanding and reinforcing the army. Britain had strongly advocated disarmament right through the 1920's and much of the 1930's and it was only when Chamberlain became PM in 1937 and foresaw the possibility of war on the near horizon did he start to genuinely rearm the country to be ready for a war. Even though Britain ideologically would have taken Germany to war over the Sudetenland crises, they were forced to appease rather than fight due to their military incapability. Chamberlain was cornered and took last ditch action to fly out and meet with Hitler and fellow European leaders in Munich. Once the war started Chamberlain admitted that at the time he knew that war was a certainty but what he achieved at Munich was to buy Britain an extra year to rearm itself. Now that Britain was ready to fight it was a culmination of a number of events in 1939 that eventually led to the brake out war on 1st September. ...read more.

However, even these strong feeling were uprooted in the dying inter-war years and British public opinion swayed after the Sudeten crises. A poll taken in 1935 showed that 92.5% of Britons asked, were in favour of an all round reduction in armaments however in June 1939, 84% answered yes to a poll asking whether they would like to see a military alliance between the Allies in order to fight Germany. In conclusion, although Germany's attack on Poland in September 1939 was the immediate trigger to World War Two it was by no means the cause or reason that Britain promptly declared war on Germany. This attack on Poland merely signified the appropriate and opportune time for Britain to retaliate towards a country that had been dangling war before the British eyes for some time already. It was only then in September 1939 did all the many other factors fall into place and the country was ready to fight. Military incapability up to this point as well as the strong desire to avoid conflict and rectify the situation through appeasement had been some of the reasons why it took up to this point for war to erupt. The fed-up feeling of being lied to by Hitler time and time again over the previous four years and a swing in public opinion in support of war meant that now Britain was finally ready to fight. Poland was just a good excuse. ...read more.