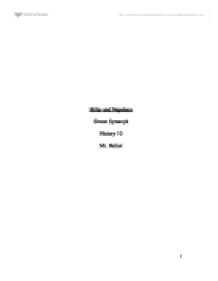 Hitler and Napoleon Simon Sywanyk History 10 Mr. Balzer Over the history of mankind there have been many different leaders, leading anything from a small group of people to an empire. Each ruler has a different view on how to be effective. Napoleon and Hitler where two of the most outstanding leaders that have ever been written about. Even though both leaders had similarities in the ways they ruled, it was the differences that made Adolf Hitler the more effective leader. Napoleon and Hitler's use of schools where very different. Education played an important part to create followers who where loyal to Hitler and the Nazi's. Students' were brainwashed into believing they were unbeatable, this was accomplished by the teachers reinforcing such things like; "no boy or girl should leave school without complete knowledge of the necessity and meaning of blood purity."1 Two of the major subjects where History and Physical Education. ...read more.

The Germans' showed a great importance to being physically fit and if any boys failed this class they would be expelled from school, which caused great humiliation. Hitler stated that he wanted boys who could suffer pain "a young German must be as swift as a greyhound, as tough as leather, and as hard as Krupp's steel."3 In the year 1935 Jewish children where no longer allowed to attend schools, because according to the Nazi government Jew's where destroying the learning experience. Napoleon believed education was very important and should be available to anyone who wanted to learn. He established the public education system and therefore created free schools. Napoleon was responsible for the opening of the University of France to allow higher education to all, regardless of race or religion. ...read more.

There was a draft line in France for men aged 20 to25, married, divorced or widowed men that were the head of a family where exempted. The new revolution of soldiers from the 'Napoleonic Era' where ruthless, they now tried to totally destroy the enemy rather then simply out manoeuvre them and take prisoners. Napoleon contributed greatly to society in many ways such as the Napoleonic Code. This was the basis from which legal systems around the world were formed. Even with Napoleon's great contributions it seems that Hitler was more effective through his brutal ways. Hitler's main concentration was on controlling the people, rather then contributing to society as a whole. He new that if his followers feared for their own safety they would stand behind him and defend their country with the promise of being the ultimate power. Affections are very changeable, but terror keeps people loyal. This shows that as Niccol Machiavelli once said "It is better to be feared then loved. ...read more.