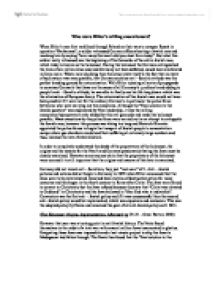 Hitler's Willing Executioners - The role of Ordinary Germans during the Holocaust

Who were Hitler's willing executioners? When Hitler's men first mobilized through Poland on their way to conquer Russia in operation "Barbarossa", a soldier witnessed German officers beating a Jewish man and mocking him by saying "how many German's did you steal from today". But what this soldier really witnessed was the beginning of the Genocide of the entire Jewish race, which today is known as the holocaust. During the holocaust the Germans extinguished the lives of six million Jews and, had Germany not been defeated, would have annihilated millions more. Whats more shocking than the actual event itself is the fact that an event of such nature was even possible, that German societies anti - Semitic attitude was the perfect breeding ground for extermination. With Hitler injecting all sorts of propaganda to convince German's that Jews are the cause of all Germany's problem's and adding to people's anti - Semitic attitude, he was able to finally see his life long dream which was the elimination of European Jewry. The extermination of the Jewish race would not have been possible if it were not for the ordinary German's in particular the police force battalions who were carrying out the executions. Although the "final solution to the Jewish question" was engineered by Nazi leadership, it was the willing executioner's/perpetrators who abided by this evil genocide and made the holocaust possible. ...read more.

Police battalions were the branch of the Order Police most intimately involved in the Genocide. Unlike other parts of the Order Police, their mobility made them a flexible general instrument for implementing genocidal policies. A large percentage of the Germans who were members of the police battalions were ordinary Germans, they were not selected according to military or ideological fitness. In fact, the police battalion would take anyone it could get and its men were usually considered unfit for military service, after all, their main objective was to exterminate Jews and this required no military experience. The men of police battalions operated both alone and frequently in conjunction with other forces from other institutions including the German army, SS Security Service and camp personnel. The activities the police battalion force participated in ranged widely. They undertook ordinary police duties, engaged in anti-partisan warfare, some even fought beside the army on the front. But their most valued activity by the Nazi's at the time was their deportation of people to concentration camps either to be killed or provide labour for Germany, and regularly hunting and killing Jews in large masses in German occupied territory. It was due to these activities undertaken by the police battalion force that the holocaust was made possible. (Hitler's Willing Executioners: Ordinary Germans And The Holocaust pg181 - David Jonah Goldhagen, 1996) Police Battalion 101 was an institution that engaged wholeheartedly in the German extermination of European Jewry. ...read more.

Two other sergeants Bentheim and Arthur Kammer also excused a few men under their commands. A third sergeant, Heinrich Steinmetz explicitly told his men before the executions that they do not have to kill. "I would like also to mention that before the beginning of the execution, Sergeant Steinmentz said to the platoon that those who did not feel up to the upcoming task could come forward." There was an understanding between the battalion that the men who did not want to kill should not be forced to do so. Since sergeants and battalion commanders were exercising the acceptance of one opting out of killing, it means that those who slaughtered Jews did so voluntarily. (Hitler's Willing Executioners: Ordinary Germans And The Holocaust pg 220-222 - David Jonah Goldhagen, 1996) In conclusion the holocaust would not have been possible if it were not due to the willingness of ordinary Germans in the police battalion force to slaughter Jews in extremely large numbers. The reason that many men participated in these killing institutions was due to them being positioned by Nazi propagandists into believing that the Jews were part of a conspiracy theory and that if they did not exterminate them first, then they (the German's) would be exterminated by the Jews. The men who carried out the executions were not forced as they were allowed to not take part in the killings, rather the men who carried out the executions done so voluntarily. ...read more.