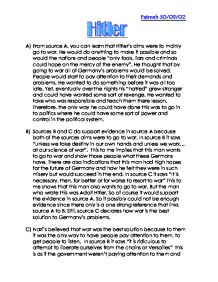 A) From source A, you can learn that Hitler's aims were to mainly go to war. He would do anything to make it possible and so would the nations and people "only fools, liars and criminals could hope on the mercy of the enemy". He thought that by going to war all of Germany's problems would be solved. People would start to pay attention to their demands and problems. He wanted to do something before it was all too late. Yet, eventually over the nights his "hatred" grew stronger and could have wanted some sort of revenge. He wanted to take who was responsible and teach them there lesson. Therefore, the only way he could have done this was to go in to politics where he could have some sort of power and control in the political system. ...read more.

So of course it would support the evidence in source A. So it possibly could not be enough evidence since there only is a one strong reference that links source A to B. Still, source C declares how war is the best solution to Germany's problems. C) Nazi's believed that war was the best solution because to them it was the only way to have people pay attention to them, to get people to listen. In source B it says "it is ridiculous to attempt to liberate ourselves from the chains or Versailles" this is as if the government weren't paying attention to them and how they were trapped and war was the only way to break free from poverty, low income and people losing their job. ...read more.

The bird on top to me shows freedom. The bird is free and "with" them. This poster is not only a picture of Germany making an impact on the world but a "statement". E) I strongly agree that war was inevitable. With the way things were going it would have been crazy to rule out the idea of war. Hitler was what Germany was looking for. He brought them back on their feet and showed the world what Germany was really made of. He used strategies and propaganda to intrigue, capture and indulge people in. He told them what they needed to hear and what they needed most. A leader. He brought them hope and care. Something that those years of depression had detached. At last Hitler was getting what he wanted. Supporters, followers and a country back to its finest. ...read more.