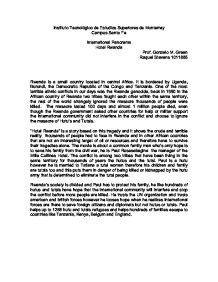 Instituto Tecnol�gico de Estudios Superiores de Monterrey Campus Santa Fe International Panorama Hotel Rwanda Prof. Gonzalo M. Green Raquel Stevens 1011885 Rwanda is a small country located in central Africa. It is bordered by Uganda, Burundi, the Democratic Republic of the Congo and Tanzania. One of the most terrible ethnic conflicts in our days was the Rwanda genocide, back in 1990 in the African country of Rwanda two tribes faught each other within the same territory, the rest of the world strangely ignored the masacre thousands of people were killed. The masacre lasted 100 days and almost 1 million people died, even though the Rwanda government asked other countries for help or militar support the international community did not interfere in the conflict and choose to ignore the masacre of Hutu's and Tutsis. ...read more.

Rwanda's society is divided and Paul has to protect his family, he like hundreds of hutus and tutsis have hope that the international community will interfere and stop the conflict before more people are killed. He trusts the UN organization and trusts american and british forces however he looses hope when he realizes international forces are there to save foreign citizens and diplomats but not hutus or tutsis. Paul helps up to 1268 hutu and tutsis refugues and helps hundreds of families escape to countries like Tanzania, Kenya, Belgum and England. In modern history numerous ethnic conflicts have began like a minor problem and then developed into civil wars that leave thousands of deaths. ...read more.

This region is an excuse for almost every Pakistani attack against India or against their citizines and the Indian government have used to conflict to create tension in the region and cause Pakistani problems with international organizations. The cultural differences cause intolerance leading to a war where no one has values or ideals, where no one is good or bad there are just fighiting. Somehow Rwanda's people lost their ideals and their values and the division was so deep they were not only against each other but against themselves. Coexistence between different ethnic groups is something difficult to achive but not impossible, unity is not something that should depend on race, gender, religion or tribe is something bigger that should involve every human being and we must learn to respect each other and accept each other with our similarities and differences. Source MGM, Hotel Rwanda India Wikipedia ...read more.