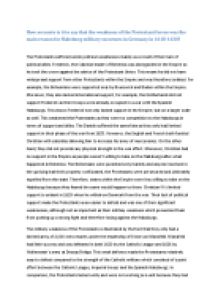 How accurate is it to say that the weakness of the Protestant forces was the main reason for Habsburg military successes in Germany in 1618-1630?

﻿How accurate is it to say that the weakness of the Protestant forces was the main reason for Habsburg military successes in Germany in 1618-1630? The Protestants suffered under political weaknesses mainly as a result of their lack of political allies. Frederick, the Calvinist leader of Bohemia was disregarded in the Empire as he took the crown against the advice of the Protestant Union. This meant he did not have widespread support from other Protestants within the Empire and was therefore isolated. For example, the Bohemians were supported only by Brunswick and Baden within the Empire. Moreover, they also lacked international support, for example, the Netherlands did not support Frederick as their troops were already occupied in a war with the Spanish Habsburgs. This shows Frederick not only lacked support in the Empire, but on a larger scale as well. This weakened the Protestants as they were no competition to the Habsburgs in terms of support and allies. The Danish suffered the same fate as they only had limited support in their phase of the war from 1625. ...read more.

A lack of support is mainly to blame for the weakness of the Protestants military force. For example, Frederick would have expected the support of the English since King James I was Frederick?s father-in-law. However, James I was wary of the strength of the Habsburgs and understood that even with this help, they would be too strong to overcome. Another reason England would not support Frederick was that the King was looking to obtain a marriage alliance between his son and heir to the throne, Charles, and the Habsburgs. Being involved with Frederick would prevent him from doing so successfully. The support the Protestants did have, for example Bethlen Tabor from Transylvania, was weakened and had to retreat due to lack of money. This was a serious loss to the Protestants as he had already proved he had the ability to defeat the Habsburgs. The Danish also lacked allies in their phase of the war between 1625-29 which allowed the Catholic to focus their attention on one opponent. ...read more.

Their military strength is illustrated by the fact they could use their own troops and Ferdinand took advantage of this by sending in 7000 of his own men. On top of this, the Spanish Netherlands raised 20,000 men under the leadership of Spinola to help the Habsburg cause which is significant as it provided physical manpower to the Habsburgs army instead of just funding them. Maximilian reactivated the Catholic League alliance and sent in troops under the command of Tilly showing the Catholic League were a source of not only diplomatic support but militarily as well. The Catholic League?s military involvement was significant because Tilly succeeded in defeating Mansfeld in 1620, showing they provided the Habsburgs with support that was active in defeating the Protestants. The military strength of the Habsburgs is also due to their method of attack; whilst Spinola attacked the Palatinate, Tilly and the Catholic League defeated Mansfeld at the Battle of White Mountain in 1620. They were successful in working together whereas their Protestant opponents did not share such unison. This gave them the advantage of being able to defeat the Protestants easier as they were capable of forming a stronger attack that their opponents could not defend themselves from. ...read more.