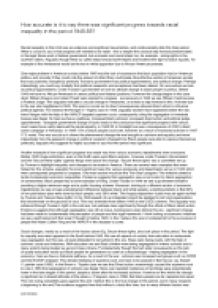 How accurate is it to say there was significant progress towards racial inequality in the period 1945-55?

﻿How accurate is it to say there was significant progress towards racial inequality in the period 1945-55? Racial inequality in the USA was an extensive and significant issue before, and controversially after this time period. What is crucial to say is that progress still needed to be made - this is despite the colossal step forward predominately in the legal frame work of federal government, but economic and social steps too, for example - voting rights in the southern states. Arguably though these so called steps forward both helped and hindered the fight for black equality. An example of this hinderance would be the rise in white opposition due to African American protests. One major problem in American society before 1945 was the lack of expression the black population had on American politics, and crucially if they could vote the amount of affect they could make.One effective section of American society that was positively changed by primarily Truman's government was political appointments, and political change. Perhaps interestingly you could say, limitedly that political viewpoints and acceptance had been altered. On one section we look at political appointments. Under Truman?s government we see an attitude change to black people in politics. ...read more.

Sweatt V. painter case (1950). In the Brown v. Topeka case we see that Direct action unswervingly caused the supreme court to rule in 1954 that segregation of schools was illegal. More over reported incidences of lynchings were proportionally lower in the later stages of this period, despite a boom after the increased activism. However on the whole the change is significant as it altered attitudes of the plessy v. Ferguson case in 1896, that black people can be ?separate but equal? This new ruling completely goes against this and I believe this is the true change of this period, and in many respects a beginning to the end.The evidence suggests here that without a doubt this time, due to many different factors was crucially significant to the framework of equality that was needed to change older and newer generations viewpoints on African Americans. Arguably in this light, this period seems detrimentally effective. In stark contrast we look on the other side of the spectrum. We see numerous de jure laws being placed, and we see that framework being laid - but how significant is that progress? How effective were those laws? We are now underpinning how little de facto change actually took place, especially in the political realm. ...read more.

However in stark contrast we look at the other side of the spectrum, relatively significant progress had been made. For example if you look at the years before 1945, we see little or no change to the legal framework, other than the 14th and 15th amendments that considerably contributed to equality of African Americans, however in this period we see masses of physical change in all aspects of society. More over we see increased activism due to the war laid down the fundamental roots of direct action. For example one major fault of the Journey of reconciliation was the little time it was over, 2 weeks. However these newly founded groups (UDL, NAACP, CORE) in this period grounded themselves, and learnt - for example the Montgomery bus boycott was a success, with the help of a better organised NAACP. On the whole I believe that it is hard to ignore the progress made in this period. From 1945, with primarily the help from supreme court many aspects of several generations lives were improved - and this improvement is more that can be said for any other period of time. It is this comparison alongside compelling grass root policies of Truman?s government that leads to the argument that it is accurate to say there was significant progress made 1945-55. Josh Chambers ...read more.