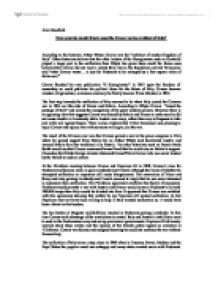 How accurate would it be to describe Cavour as the architect of Italy?

Alex Mansfield How accurate would it be to describe Cavour as the architect of Italy? According to the historian Arthur Whyte Cavour was the "architect of modern kingdom of Italy". Other historians believe that the other leaders of the Risorgimento such as Garabaldi played a larger part in the unification than Whyte has given them credit for. Some even believed that Cavour did not want a united Italy, but as the Republican activist Pallauicino said "what Cavour wants... is just for Piedmont to be enlarged by a few square miles of Italian soil." Cavour founded his own publication "Il Risorgimento" in 1847 upon the freedom of censorship so could publicise his political ideas for the future of Italy. Cavour became minister of agriculture, commerce and navy he finally became Prime Minister in 1852. The first step towards the unification of Italy seemed to be when Italy joined the Crimean war in 1854 on 5the side of France and Britain. ...read more.

It appeared that Cavour was satisfied with this agreement showing that neither he nor Napoleon III wanted unification. In fact Napoleon may not have been willing to help if Italy wanted unification as, it would have been a threat on his borders. The two battles at Magenta and Solferino resulted in Piedmont gaining Lombardy. At this time Cavour took advantage of the revolutions in central Italy and Austria's inability to react to send in the Piedmontese army and set up provisional governments. Napoleon III obviously worried about these events and the opinion of the French public signed an armistice at Villafranca. Cavour was furious and resigned knowing he could not continue the war without Frances help. The unification of Italy came a step closer in 1860 when in Tuscany, Parma, Modena and the Papal States the popular mood was unhappy and many states wanted union with Piedmont. Cavour offered Napoleon Nice and Savoy in return for the states of Central Italy. ...read more.

Although he lost Nice and Savoy he gained France's help (much to Mazzini's displeasure who believed only Italians should unite Italy, but he was an idealist.) It was only after the taking of Central Italy in 1860 that unification appeared conceivable. However Cavour was prompted into action by Garabaldi's actions in the south, the result was a "kingdom of Italy. Cavour died in 1861 so he did not live to see the final unification of Italy when Venetia and Rome were added in 1866 and 1870, but he did play an important role in Italy's unification. In conclusion to call him the architect of modern Italy would be too extreme as without Garabaldi's actions in the south it is doubtful whether he would have created the kingdom. Cavour can be viewed as the architect of Italy, an opportunist or even a Piedmontese expansionist. The contribution that Cavour made is still debated over as knew evidence is examined, but I believe that the view of Arthur Whyte is too biased as without the contribution made be others the unification of Italy may not have occurred. ...read more.