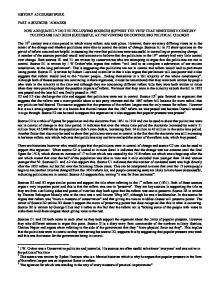 How adequately do the following sources support the view that nineteenth century politicians had been successful at preventing or controling political change?

HISTORY A2 COURSEWORK PART A SOURCES: 16 MARKS HOW ADEQUATELY DO THE FOLLOWING SOURCES SUPPORT THE VIEW THAT NINETEENTH CENTURY POLITICIANS HAD BEEN SUCCESSFUL AT PREVENTING OR CONTROLING POLITICAL CHANGE? The 19th century was a time period in which many reform acts took place. However, there are many differing views as to the extent of the change and whether politicians were able to control the extent of change. Sources A1 to F2 show opinions on the period of reform acts and are helpful in assessing the view that politicians were successful in controlling or preventing change. A number of the sources provided would lead someone to believe that the politicians in the 19th century had very little control over change. Both sources B1 and E1 are written by conservatives who are attempting to argue that the politicians are not in control. Source B1 is written by J W Croker1who argues that reform "will lead to as complete a subversion of our ancient constitution, as the long parliament". This is suggesting that politicians are not in control and reform would lead to parliament losing power. Source E1 is written by Robert Lowe and is similar in that it also argues that parliament will lose power and it also suggests that reform would lead to the "violent people...finding themselves in a full majority of the whole constituency". ...read more.

There are historians however who would argue that the politicians were in control of change and source C2 can also be used to support this argument. When source C2 is looked at in more detail it indicates that the change was not extreme until the final figure for 1918, which shows an increase of 17 million which was caused by the 1918 reform act which was a huge step after the war which meant that over the half of the population was able to vote and it only excluded men younger than 18 and women younger that 30. Sources C1 and A2 also support this. Source C1 indicates that the number of contested seats was high directly after the 1832 reform act but fell over the following fifteen years. This can be interpreted to mean that over the 15 years people begin to realise that little has changed from the 1832 reform act, and people contesting seats are likely to have been unsuccessful, indicating politicians are in control. Source A2 supports this, writing "it was far from universal". Sources B2 and B3 argue similar points and support the title when referring to the 1st reform act (1831). Both of these sources argue a very important point and this is that the reform was one to "preserve". ...read more.

He writes "Mr Gladstone is convinced that the English rural voters, forming the majority of those to be enfranchised, may prove to be 'conservative'". This indicates that Gladstone is of the belief that rural voters are not radical and will allow the politicians to retain power and control. It seems that although politicians were not able to 'prevent' political change, they were generally successful in controlling the political change. Sources B2 and B3 are the most effective sources in showing the control hat politicians had as they both agree that politicians were in control although they are of conflicting viewpoints. The gradual way that the franchise was extended over a period of one hundred years also indicates control. However it must be remembered that although the change was gradual it did take place and by 1918 women had gained the vote supporting the fact that change wasn't prevented. 1 J.W. Croker was a Conservative politician and journalist. His sources are often useful as he knew 'everyone' and was active in the politics of his time 2 This source was written by Rydon Harrison who is a Marxist historian which is why he argues that popular pressure in the form of the reform league was an important factor in reform 3 "the agitation for which was standing in the way of every measure of practical improvement" ...read more.