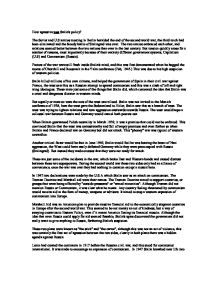 How agressive was Stalin's policy? The Soviet and U.S armies meeting in Berlin heralded the end of the second world war, the third reich had been eliminated and the bloody battle of Stalingrad was over. The two armies embraced each other, and relations seemed better between the two nations than ever in the last century. But tension quickly arose for a number of reasons, most importantly because of their entirely different government systems, Capitalism (U.S) and Communism (Russia). Factors of the war were still fresh inside Stalin's mind, and this was first demonstrated when he bugged the rooms of Churchill and Roosevelt in the Yalta conference (Feb, 1945.) This was due to his high suspicion of western policies. Stalin killed millions of his own citizens, and helped the government of Spain in their civil war against Franco, the west saw this as a Russian attempt to spread communism and this was a clash of left and right wing ideologies. These were just some of the things that Stalin did, which cemented the idea that Stalin was a cruel and dangerous dictator in western minds. ...read more.

Any country feeling threatened by communism would receive aid in the form of money, weapons or advisors. It aimed to stop a western expansion of communism into Europe. Marshall Aid was an American plan to provide massive financial aid to the economically stagnant countries in Europe after the second world war. This seemed to be not merely an act of kindness, but a way of swaying countries to Eastern Policy, even if it meant America flexing its financial muscle. Although the idea that even Russia could apply for aid seemed feasable, Stalin's spies discovered the government did not really want to give anything to Russia, furthering Stalin's suspision. These two plans were known as "the stick" and "the carrot", although this was not an act of violence, this was certainly the first act of agression between the two sides, clearly in both plans there was a hidden agenda against Russia. Lenin had created the comintern in 1917 before the Russian civil war, and this stood for communist international. ...read more.

If the tables were turned, the west would have no choice but to do the same. Although America may have condemned Stalin for spreading eastwards and using dirty tactics, America was far worse. One need look no further than Italy for an example of this. The first general election since world war 2 was due in April 1948. It looked as if the communists may win. American money was channeled, via the newly formed CIA to fund non-communist candidates (this was the CIA's first political operation.) In the USA, America launched a propaganda campaign, 10 million Italian immigrants in the USA sent letters to their Italian relatives encouraging them not to vote communist, explaining how detromental it would be to Europe. It was a hugely successful operation, the communist vote was almost half, and all the communist party were devastated. Nuclear Tests and Launches (i.e Bikini Atoll and Nagasaki) were another thing that make Stalin's policies seem all the more defensive. It is thought that the launches had an alterior motive which was to alarm Russia, therefore spreading a countries power seems all the more reasonable in light of the power demonstrated by these Nuclear Warheads. ...read more.