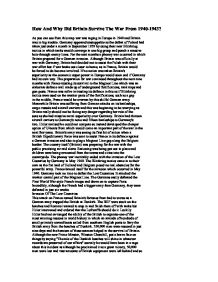 How And Why Did Britain Survive The War From 1940-1943? As you can see from this map war was raging in Europe in 1940 and Britain was in big trouble. Germany appeared unstoppable as the defeat of Poland had taken just under a month in September 1939 by using their new Blitzkrieg tactics in which tanks would converge in one big group and punch a massive hole through enemy lines. For the next months a phoney war occurred in which Britain prepared for a German invasion. Although Britain was officially at war with Germany, Britain had decided not to assist the Polish with their war effort but if war broke out closer to home, as in France, Britain would be forced to do become involved. If no action was taken Britain's superiority as the economic super power in Europe would soon end if Germany had its own way. The preparation for war continued throughout the next nine months with France trusting its survival to the Maginot Line which was an elaborate defence wall made up of underground fortifications, tank traps and gun posts. France was na�ve in trusting its defence in this as if Blitzkrieg tactics were used on the weaker parts of the fortifications, such as a gap in the middle, France would be overrun by this skilful German army. Meanwhile Britain was suffering from German attacks on its battleships, cargo vessels and aircraft carriers and this was beginning to be worrying as Britain really should not be facing any danger regarding her rule of the seas as she had massive naval superiority over Germany. Britain had thirteen aircraft carriers to Germany's none and fifteen battleships to Germany's two. Hitler realised he could not compete so instead developed the cheaper option of U-boats from which would come an important part of the war in the next few years. Britain's army was seeing its first bit of action when a British Expeditionary Force was sent to assist France in its defence against a German invasion and also to plug a Maginot Line gap along the Belgium border. ...read more.

The land girls and other women helped to sustain production levels in every branch of the economy. The Land Girls One of the most important factors in Britain's victory was its leader, Winston Churchill. Churchill succeeded Chamberlain as Prime Minister on May 10, 1940. During the awful days that followed-Dunkirk, the fall of France, and the blitz-Churchill's rousing speeches united the British to continue the fight. He urged the British people to conduct themselves so that "if the British Empire and its Commonwealth last for a thousand years men will still say: 'This was their finest hour." By successful co-operation with President Roosevelt he was able to secure military aid and moral support from the United States. After the Soviet Union and the United States entered the war in 1941, Churchill established close ties with the other leaders of what he called the "Grand Alliance". Travelling ceaselessly throughout the war, he did much to co-ordinate military strategy and to ensure Hitler's defeat. It must be said that without Winston Churchill Britain's people would have lost heart and probably would have wanted to surrender but with his skilled speeches, military tactics and outright stubbornness he kept the country united and got Britain through the war. Winston Churchill One of the most important battles of the war for Britain was the Battle of the Atlantic. This was a German effort to sink allied shipping using its U-boats. The German submarines hunted in "wolf packs" and targeted almost anything that floated as when U-boats sunk the passenger liner Athenia. The reason for Hitler putting so many resources into this battle was that Britain was an island and so had to get most of its supplies from other countries. If Britain could be starved out with convoys from America being sunk then she would have to surrender. Hitler did not put his resources into battleships because Britain had such superiority in this area. ...read more.

The US Congress passed the Lend-Lease Act and appropriated an initial $7 billion to lend or lease weapons and other aid to any countries that the president might designate. Britain profited most from this scheme and used it extensively to equip its armed forces. The greatest factor for Britain in winning the campaign in North Africa was having masses of tanks produced by America. Although they were of poor quality compared to Germany's, the sheer number of them meant that Britain won in North Africa. America loaned us all kinds of equipment such as Liberty ships, bombs, guns, planes, medical equipment etc. When American forces did eventually arrive in Britain with its men and machinery Britain had its help in bombing Germany's cities and military targets. Simply having the moral support of America helped to improve the morale of the British people. In the end it was probably America's help that insured Britain's survival between the war years of 1940-1943. To conclude, Britain did not find the survival of 1940-43 easy and in the end it suffered masses of deaths and destruction. Survival could often be put down to enemy failings such as when Hitler decided not to bomb the RAF but instead bomb British cities. Not putting Germany's best equipment into North Africa meant that Germany could not fuel its army so easily. American intervention meant that we could equip our army with the masses of military hardware the Americans produced. German invasion of Russia took the pressure off us and military planning and scientific skill meant that the German threat in the Atlantic was put to rest. The grit and determination of the British people meant that we survived the Blitz. Although as a result of the Second World War this country was in massive debt and had work to do to build itself up again, the factors from 1940-43 caused Britain's eventual victory over it's enemies and enabled future generations to live their lives freely and peacefully. Just think what could have happened? ...read more.