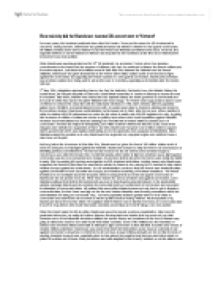 How and why did Eisenhower increased commitment to Vietnam

How and why did the Eisenhower increase US commitment to Vietnam? For many years, the American presidents have cited the Domino Theory as the reason for US involvement in Indochina. During his term, Eisenhower had greatly increased US efforts in Vietnam in war against Communism. US military advisers were sent to Vietnam to aid the French and financial commitment was made. However, it is arguable whether or not the interest of Vietnam was important to the Americans at the time and if Eisenhower's involvement was truly justified. When Eisenhower was inaugurated as the 34th US president, he succeeded Truman whom had previous commitments to the French and the emperor of Vietnam, Bao Dai. He continued to finance the French military and the dumb emperor. Just before the military unrest in Dien Bien Phu between the Vietminh and the French militaries, Eisenhower had given financial aid to the French $385 million dollars worth of armaments to fight against the communists. By supporting the French soldiers in a war against communism, Eisenhower prevented any American soldiers from being sent in yet another war in Indochina, especially as immediate after the Korean civil war. ...read more.

He felt that paying other nation to fight an American cause; fight against communism was far more convenient and cheaper. He provided further aid when the French were losing the battle in early 1954 by sending US bombers accompanied by 200 American technicians. Another reason why Eisenhower supported the French in Dien Bien Phu was that he wanted to France to be a strong NATO member to help defend Western Europe against the Soviet threat. The US administration concluded that the French were invaluable allies against Communism in both Indochina and Europe, and therefore deserving of American assistance. The French threatened to be unhelpful about the European defence arrangements and their war against Communism if Eisenhower did not provide more aid. While many viewed the war as America's way against Communism, some historians believed that further US involvement was due to Eisenhower's personal interest. In the presidential election campaign Eisenhower had rejected the Democratic policy of containment of Communism and advocated the liberation of communist states. HE realized this was a fatal mistake because not only has he yet to liberate a communist state, the Red Scare was high on the rise and Senator Macarthy was throwing accusations within the administration for being pro-communist. ...read more.

In fight against communism, American patrons agreed and suggested that one way they could beat communism in the north is by building a stable, non-communist state in the south. Despite being regarded as incompetent and incapable, Diem together with his fraud election convinced the Americans to support his regime in the south. America wanted to stop the election coming up in 1956 knowing that the people would vote for Ho Chi Minh who is pro-communist. Even though Eisenhower's men did not feel comfortable with Diem's regime and the lack of ability of South Vietnam to conduct a war and govern by themselves, they still went ahead and supported this unpopular regime as they see this was the only way to stop Ho from turning Vietnam into a communist state. Eisenhower's involvement in Vietnam was claimed to be simply a crusade against communism. He gave financial and military aid to the French because he did not want to sacrifice anymore of his men while still fighting against communism. In continue effort to stop the spread of communism, he gave further help to Diem's government despite it being unpopular and oppressive. Even though he had 'lost' North Vietnam to communism, he had managed to increase involvement in Vietnam without having to send US troops and prevent civilian casualties. ...read more.