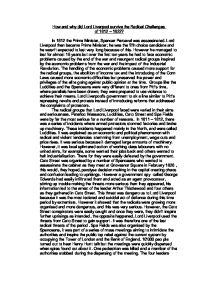 How and why did Lord Liverpool survive the Radical Challenges of 1812 1822?

How and why did Lord Liverpool survive the Radical Challenges of 1812 - 1822? In 1812 the Prime Minister, Spencer Perceval was assassinated. Lord Liverpool then became Prime Minister; he was the fifth choice candidate and he wasn't expected to last very long because of this. However he managed to last for almost 15 years but over the first ten years he had to face economic problems caused by the end of the war and resurgent radical groups inspired by the economic problems from the war and the impact of the Industrial Revolution. The handling of the economic problems caused more support for the radical groups, the abolition of income tax and the introducing of the Corn Laws caused more economic difficulties but preserved the power and privileges of the elite going against public opinion at the time. Groups like the Luddities and the Spenceans were very different to ones from Pitt's time, where parallels have been drawn; they were prepared to use violence to achieve their means. Lord Liverpool's government took a line similar to Pitt's repressing revolts and protests instead of introducing reforms that addressed the complaints of protestors. ...read more.

Pentrich wasn't serious because it was easily stopped by the authorities and didn't have much support only 200 men. The Blanketeers were a crowd of 4000 men who march to London to present the Prince Regent with a petition calling for the repeal of the Corn Laws and the reinstatement of Habeas Corpus. The majority of the protestors were under 30, whose prospects had changed radically in the last 15 years. However, 300 started the long march to London but they were stopped by troops in their home town of Stockport. Therefore, they were not very dangerous because they didn't get very far and only wanted to petition the Prince Regent so no revolutionary intent. They both showed that the working classes were not prepared to be silenced about matters that concerned themselves for example unemployment and industrialisation. It showed that the 'political nation was being enlarged' (Eric Evans). The last mass protest of the period was the Queen Caroline affair which came just after the Cato Street Conspiracy as most of the radical activity had died down. In 1820, George III dies and was succeed by George IV who lived apart from his wife Queen Caroline. ...read more.

never fully enforced' meaning that not enough people were prosecuted under it and that the authorities didn't want to either. However J. Marlow says '... a virtual watertight blanket over the radical activities' meaning that the Six Acts stopped or reduced the threat of the radical groups meaning that they were never a threat to government. However, the Six Acts were a virtual blanket over radical groups activities meaning that they never had to be fully enforced because the acts deterred people. It was a symbolic measure rather than an intended measure to punish and repress people Overall the most important reason why Lord Liverpool survived the radical challenges was because of the weakness of the radical challenges themselves; they were localised affairs with no national support. Had they united then Lord Liverpool probably wouldn't have survived. That lack of unity meant that Lord Liverpool could stop the threats one by one. While the weakness of radical threats was the most important, Lord Liverpool's use of spies and legislation is also important but the legislation only came after the last of the most serious threats, it was a deterrent more than an active solution to root out the radicals and by then the economy was reviving and the root of all radicalism at the time was to do with economic distress. ...read more.