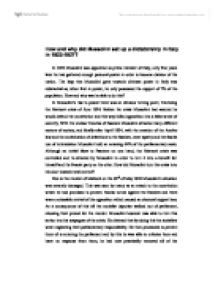 How and why did Mussolini set up a dictatorship in Italy in 1922-1927? In 1922 Mussolini was appointed as prime minister of Italy, only five years later he had gathered enough personal power in order to become dictator of the nation. The leap that Mussolini gave towards ultimate power in Italy was substantial as, when first in power, he only possessed the support of 7% of the population. How and why was he able to do this? In Mussolini's rise to power there was an obvious turning point, this being the Matteoti crisis of June 1924. Before the crisis Mussolini had assured he would defend the constitution and this way lulled opposition into a false sense of security. With the unclear theories of Fascism Mussolini attracted many different sectors of society, and finally after April 1924, with the creation of ...read more.

As a consequence of this all the socialist deputies walked out of parliament, showing their protest for the murder. Mussolini however was able to turn this action into his scapegoat of the crisis. He claimed that by doing this the socialists were neglecting their parliamentary responsibility. He then proceeded to prevent them of re-entering the parliament and by this he was able to criticise them and have no response from them, he had now practically removed all of his opposition of the scene. Moreover, in order to restore his dignity and bring back support Mussolini admitted blame of everything that the fascists had ever done. With this however he gave the sense that he was taking blame for good, as if he took the blame of things he hadn't personally done. ...read more.

Following to this Mussolini took care of setting his own power within fascism. He had under his charge eight ministries and made himself responsible of the party. By 1926 he was governing by decree and once he achieved this he started to secure this position. He did this by purging party leaders lower in the party. He set up a secret police that would take care of looking for any possible opposition and removing it. To conclude it is clear that Mussolini's intention was no to become dictator from the first time. Mussolini was presented with a situation were he was about to loose it all and his quick reaction helped him out of it and left him an easy path towards more power. He effectively followed this path by ably removing opposition and finally created a dictatorship that was centralised towards himself, securing his position so power wouldn't be taken away from him. Rafa Ortega Salvador ...read more.