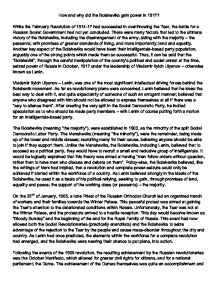 How and why did the Bolsheviks gain power in 1917?

How and why did the Bolsheviks gain power in 1917? While the February Revolution of 1914-17 had succeeded in overthrowing the Tsar, the battle for a Russian Soviet Government had not yet concluded. There were many factors that led to the ultimate victory of the Bolsheviks, including the disarrangement of the army, siding with the majority - the peasants; with promises of greater standards of living, and more importantly; land and equality. Another key aspect of the Bolsheviks would have been their intelligentsia-based party population, arguably one of the strong points which made them so successful. Thus, it can be said that the "Bolsheviki", through the careful manipulation of the country's political and social unrest at the time, seized power of Russia in October, 1917 under the leadership of Vladamir Ilyich Ulyanov - otherwise known as Lenin. Vladamir Ilyich Ulyanov - Lenin, was one of the most significant intellectual driving forces behind the Bolshevik movement. As far as revolutionary plans were concerned, Lenin believed that he knew the best way to deal with it, and quite expectantly of someone of such an arrogant manner; believed that anyone who disagreed with him should not be allowed to express themselves at all if there was a "way to silence them". After creating the very split in the Social Democratic Party, he incited speculation as to who should be made party members - with Lenin of course putting forth a motion for an intelligentsia-based party. The Bolsheviks (meaning "the majority"), were established in 1903, as the minority of the split Social Democratic Labor Party. The Mensheviks (meaning "the minority"), were the remainder, being made up of the lower and middle classes; recruiting many for their cause, believing anyone should be able to join if they support them. Unlike the Mensheviks, the Bolsheviks, including Lenin, believed that to succeed as a political party, they would have to recruit a small and reclusive group of intelligentsia. ...read more.

These promises of much greater freedoms and conditions under a socialist state had showed, and reinforced that the Bolsheviks carried such a great influence over the people that they succeeded in completely crippling Nicholas II's control over his city, and people. Due to the overwhelming scale of the February revolution, Nicholas II was forced to abdicate and Russia finally became a republic under control of the provisional liberal government. The Mensheviks believed the revolution to have gone far enough, and the achievement was great enough to crush all further thoughts of revolution and to build on the new parliament. The Bolsheviks, however, greatly differed and the results of February-March only marked only a partial victory, for a party whom would never be satisfied until a completely Socialist Democratic state had been created for Russia. The October Revolution of 1917 would soon become a reality and a complete Soviet Democratic state would emerge amid the bloodshed of a further revolution. In early May, June and July, Lenin had returned to Russian after being in exile, bringing with him his renewed thoughts of seizing power for the Bolsheviks - and them alone. A large series of riots upon his return showed the Bolshevik's continued efforts being reflected as Soldiers protested about the unpopular "prosecution of the war" by the provisional government. These riots continued, and more riots were seen in June, and July - which saw the worst of all of the protest actions so far. Armed mobsters (soldiers of the garrison) led marches through the capital, with much devastation being laid upon infrastructure and government buildings. These actions were seen as being the Bolshevik's actions, but as Lenin wasn't even in the capital when they began, he seemingly couldn't have orchestrated such an event. These events all played to Lenin's ultimate goal, showing him to take advantage of it as he reviewed his party's plans. ...read more.

Later, around the 26th-27th of October, it was finally the end of the Bolsevik's revolution, with the result being that of Lenin dominating the assembly of the Congress of Soviets. Lenin issued two decrees; that of a treaty of peace with Germany and Austria, and the seizure of private ownership of land and the distribution of that land to the peasants whom wishes to use it to cultivate. This final measure had resulted in Lenin taking complete control, and the first Soviet Government had now been formed. It can be seen, that through the Bolshevik's own careful establishment of an intelligentsia-based party, and the control maintained on their actions, they essentially sought to manipulate the country to their own means, and thus throw the Tsar regime out, and the provisional government to seize power for themselves. From the 1905 revolution, to the February revolution, the Bolsheviks demonstrated that their absolute resolve to manipulate the social unrest of the citizens to turn them against their government never ceased in its potency. The Kornilov revolt ended in complete success for the Bolsheviks as their careful planning and extreme influence - only achieved through turning those oppressed to their side - and as such, they became a force to be reckoned with. The Bolsheviks can then be concluded to have gained power by an accumulation of their manipulative tactics, and their actions within revolutions leading up to the October Revolution. The final forced-seizure of the capital, due to their immense supporters within the Russian nation, was only a mere exercise of the Bolshevik's unwavering ability to transmute the very fabric of Russian society to overturn their own leaders. It can then be said that the Bolsheviks had indeed demonstrated that their ideals and plans had overturned that of all others in the end. Due to their intelligentsia party, manipulation of the population, and their ability to take advantage of political and social unrest of the nation of Russia, the Bolsheviks were able to gain power in the Revolution of October, 1917. ...read more.