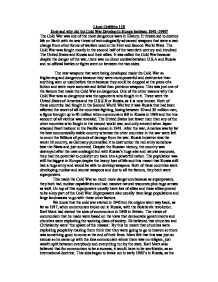 Lloyd Griffiths 11E How and why did the Cold War Develop In Europe between 1945-1949? The Cold War was one of the most dangerous wars in History. It threatened to destroy life on Earth with its new threat of technologically advanced weapons that were a vast change from other forms of warfare used in the First and Second World Wars. The Cold War was fought mostly in the second half of the twentieth century and involved The United States and Russia and their allies. It was called the Cold War because despite the danger of the war, there was no direct combat between U.S.A and Russia and no official battles or fights went on between the two sides. The new weapons that were being developed made the Cold War so frightening and dangerous because they were more powerful and destructive than anything seen or used before them because they could be dropped at the press of a button and were more accurate and lethal than previous weapons. This was just one of the factors that made the Cold War so dangerous. One of the other reasons why the Cold War was so dangerous was the opponents who fought in it. These were the United States of America and the U.S.S.R or Russia, as it is now known. Both of these countries had fought in the Second World War but it was Russia that had been affected the worst of all the countries fighting, losing between 20 and 30 million men, a figure brought up to 40 million when communism fell in Russia in 1989 and the true account of all victims was revealed. ...read more.

I also know that this poster is attempting to whip up support for a revolution and for people to be communist. In order to so this then, the poster could have been over exaggerated in order to paint a grim and unfair picture of what the Tsar and higher classes were like in Russia. I think however that what he is saying about the society is mostly true because I know that from source A3, which is an impartial source that the government was being unfair to the working class, it says in source A3 "they (the Americans) had strongly disapproved of Tsarist oppression". So I think overall, the source gives a valid account of Russian society in 1901. From that source A2, we have seen how the Bolsheviks wanted to come to power, and I know that in 1917, the communist revolution killed the Tsar and Tsaress and their families and a one party communist government replaced their rule. After this, the Americans became increasingly afraid of communism and its beliefs. This did not however mean that Russia was not afraid of America, because they had just replaced a form of Capitalism themselves, and did not want this to be ruling their country again. The ideologies of America and Russia played a key role in why both countries were so afraid of the other. Ideology is the belief of how a country should be run and your political beliefs. The Ideology of America was Democratic or Capitalist. The government was run democratically and people had a free vote of who to vote for in the elections and what party. ...read more.

We know that it is a secondary source as it was written after the event, but as it was from the man who made the decision to drop the bomb, we know that he could not have lost any memory of it, so in a way it can be considered a primary source. All of these things make the use of the atomic bombs look justifiable but if you consider that he was trying to justify a huge political decision and prove that losing hundreds of thousands of peoples lives was the right political and moral decision to take, you can see that he could be trying to use these memoirs as propaganda to prove that he was right. We also know that he would not have said in his memoirs that dropping the bomb was wrong even if he thought now it was, because it was too much of a major political decision and too big a loss of life for him to say his decision was wrong. If we compare Source A5a to Source 5c we can see the flip side of the view. Hugh Higgins took this quote from a book that said, "Japan could be forced unconditionally to surrender without the use of the bomb and an invasion" He is saying that the Japanese were ready to surrender and the Bomb was according to the joint chief of staff unnecessary. He also says that Truman was quoted saying, "if it explodes, as I think it will, we'll have a hammer on those boys!" The author is trying to put across the point that America wanted to show Russia that it had considerable firepower to use and that it wasn't afraid to use it. ...read more.