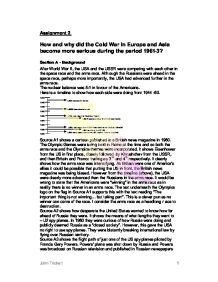 How and why did the Cold War in Europe and Asia become more serious during the period 1961-3?

Assignment 2. How and why did the Cold War in Europe and Asia become more serious during the period 1961-3? Section A - Background After World War II, the USA and the USSR were competing with each other in the space race and the arms race. Although the Russians were ahead in the space race, perhaps more importantly, the USA had advanced further in the arms race. The nuclear balance was 5:1 in favour of the Americans. Here is a timeline to show how each side were doing from 1944-60. Source A1 shows a cartoon published in a British news magazine in 1960. The Olympic Games were being held in Rome at the time and so both the arms race and the Olympics themes were incorporated. It shows Eisenhower from the US in first place, closely followed by Khrushchev from the USSR, and then Britain and France trailing as 3rd and 4th respectively. It clearly shows how the arms race was intensifying. As Britain were one of America's allies it could be possible that putting the US in front, the British news magazine was being biased. However from the timeline (above), the USA were clearly more advanced than the Russians in the arms race. It would be wrong to state that the Americans were "winning" in the arms race as in reality there is no winner in an arms race. ...read more.

Source B1 is a speech Eisenhower made to the press in 1954. Here he explains his view on the domino effect. He clearly states "...we can't afford greater losses..." This statement shows how serious the US were in stopping the spread of communism. Source B2 shows a map of Vietnam and it's neighbours in the early 1960s. It shows how North and South Vietnam were split and how the Ho Chi Minh Trail travels across both sides. Source B3 shows part of a report to President Kennedy from Vice-President Johnson after a visit to Vietnam in 1961. He states that the US must decide whether to help the countries to the best of their ability or to 'throw in the towel' and draw back their defences. This is clearly an implication for the US to push strong. The Americans have a strong sense of pride and Kennedy needed to prove himself as a strong presidential figure. Johnson knows that Kennedy's first reaction will be "We are the United States and we will not give up". He later recommends the prompt move for a major effort to help the countries 'defend' themselves. Source B4i shows an extract from a book written in 1985, therefore making it a secondary source and so we can never be sure whether Ambrose is adding hints of opinion. He is clearly behind the United States and his closing sentence backs this: "When all was ready he sent them out to save the world." ...read more.

Source D5 is a primary source showing part of Kennedy's speech at the Berlin wall. He states that Communism doesn't work and the tension increased. Conclusion Before 1961 the East-West tension existed, both sides competing against each other in the arms and space race. It was hoped that they could discuss it in summit conferences but tensions had grown too much for reasonable debates. The USA was too curious in terms of finding out how far the USSR had advanced and the Russians were extremely secretive. As the summit conference in Vienna was about to start Gary Powers' U2 spy plane was shot down. The US had problems with communism else where also. In Vietnam the US felt they had to involve themselves in the war against communism. They began helping with weapons, ammunition and other equipment. Then 4000 US "advisors" were sent to help the Vietnamese. Eventually their actions involved them in a full scale war in which thousands of Americans died with no victory from their efforts. The Vienna conference hoped that the two super powers could discuss European conflict. Britain and France were eager to see the discussions take place but they never did. The USSR then delivered an ultimatum - the Berlin Wall. Suddenly it is noticeable of how serious the Cold War had become during 1961-3. In my opinion I believe that the USA and USSR were too suspicious of each other and so imaginary threat emerged in each others heads which lead to the escalation of the Cold War. 2 1 John Trickett ...read more.