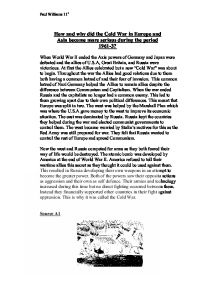 How and why did the Cold War in Europeand Asiabecome more serious during the period 1961-3?

How and why did the Cold War in Europe and Asia become more serious during the period 1961-3? When World War II ended the Axis powers of Germany and Japan were defeated and the allies of U.S.A, Great Britain, and Russia were victorious. At first the Allies celebrated but a new "Cold War" was about to begin. Throughout the war the Allies had good relations due to them both having a common hatred of and their fear of invasion. This common hatred of Nazi Germany helped the Allies to remain allies despite the difference between Communism and Capitalism. When the war ended Russia and the capitalists no longer had a common enemy. This led to them growing apart due to their own political differences. This meant that Europe was split in two. The west was helped by the Marshall Plan which was where the U.S.A gave money to the west to improve its economic situation. The east was dominated by Russia. Russia kept the countries they helped during the war and elected communist governments to control them. The west became worried by Stalin's motives for this as the Red Army was still prepared for war. They felt that Russia wanted to control the rest of Europe and spread Communism. Now the west and Russia competed for arms as they both feared their way of life would be destroyed. The atomic bomb was developed by America at the end of World War II. America refused to tell their wartime allies this secret as they thought it could be used against them. This resulted in Russia developing their own weapons in an attempt to become the greater power. Both of the powers saw their opposite actions as aggression and their own as self defence. Their armies and technology increased during this time but no direct fighting occurred between them. Instead they financially supported other countries in their fight against oppression. ...read more.

This source is very reliable as it is a contemporary source that it is a partially biased as it was written by the American vice-president saying communism will spread. Before America became actively involved they supplied "advisors" and equipment such as money, helicopters and radios. This is shown in source b4 (ii) and b5. Source b4 (ii) shows an American helicopter being used by South Vietnamese troops during the early part of the cold war. This supports the fact that America borrowed equipment such as helicopters to South Vietnam to support there fight against communism and the Viet Cong. Source B5 also backs up source B4 (ii) by saying that America did borrow equipment and advisors to South Vietnam. It also shows that deploying American troops to Vietnam was a big mistake resulting in 50,000 American casualties. The author knows this due to him having hindsight of the situation that at the time President Kennedy did not. The author also tries to compare President Kennedy with President Truman. He says that giving advisors to South Vietnam was the "beginning of a road which led in a few years to the situation Truman had been determined to avoid". He is saying that Kennedy undermined the work Truman did to prevent such a war. The sources B4 (ii) and B5 are very reliable to show that America had become involved in Vietnam because the photograph is evidence of American equipment being used and source B5 is a secondary source that has information that might not have been available at the time. Evidence of American "advisors" being sent to Vietnam is shown is source B4. Kennedy built up a counterinsurgency force that could stamp out insurrection in the jungles of Asia. This force was the "advisors" that were called the "Green Berets". With the Green Berets came new equipment such as field radios and helicopters to help the South Vietnamese. ...read more.

The threat hardened their view of Russia and the conference ended in disagreement. This was bound to increase tension between the superpowers and told Kennedy he must be firm with the Russians. This source is a not biased as it both views of Russia and America and why Russia made the threat. Source D3 shows why America takes a hard line over Berlin. Although this source is said by Kennedy and is biased it shows the importance of Berlin. America sees Berlin as an island of freedom in a communist sea and a beacon of hope behind the iron curtain. Many East Germans seen this and thousands fled there before the Berlin Wall was built. Kennedy visited the wall in 1963 and raised the morale of the German people. Source D5 shows this speech. He says Berlin people are wrong in saying Communism is the wave of the future by giving Berlin as an example of free people living in a democratic community. He praises Berlin and says Ich bin ein Berliner ( I am a Berliner). This must have made people proud of berlin although the source is baised. The cold war in Europe and became more serious during the period 1961-3 due to the America being found lying about the U2 incident and at the Paris summit when they refused to apologise for the incident. They defended there right to spy due into Russia due to it being a "closed community". This had the effect of undermining diplomatic relations and increasing tension between the two superpowers. The Berlin wall also increased tension at the time as it divided communities in Germany and however the reasons in Asia became more serious due to a completely different situation. This was due to the break out of war in Vietnam in 1959 and the deployment of American troops starting in 1962. This was a direct confrontation between capitalism and communism involving warfare which could have escalated into nuclear war so thus increasing tension in this period . Paul Williams 113 ...read more.