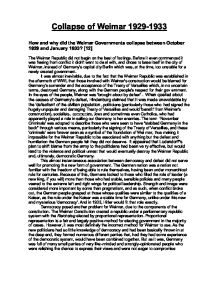 How and why did the Weimar Governments collapse between October 1929 and January 1933?

Collapse of Weimar 1929-1933 How and why did the Weimar Governments collapse between October 1929 and January 1933? [12] The Weimar Republic did not begin on the best of footings. Before it even commenced it was fleeing from conflict it didn't want to deal with, and chose to base itself in the city of Weimar, instead of Germany's capital city Berlin which was, at the time, too unstable for a newly created government. It was almost inevitable, due to the fact that the Weimar Republic was established in the aftermath of WWI, that those involved with Weimar's construction would be blamed for Germany's surrender and the acceptance of the Treaty of Versailles which, in no uncertain terms, destroyed Germany, along with the German people's respect for their government. In the eyes of the people, Weimar was 'brought about by defeat' . When queried about the causes of Germany's defeat, Hindenburg claimed that it was made unavoidable by the 'defeatism' of the civilian population, politicians (particularly those who had signed the hugely unpopular and damaging Treaty of Versailles and would 'benefit' from Weimar's construction), socialists, communists, Jews and sometimes even Catholics, who had apparently played a role in selling out Germany to her enemies. The term 'November Criminals' was adopted to describe those who were seen to have "stabbed Germany in the back" through various means, particularly the signing of the Treaty of Versailles, and these 'criminals' were forever seen as a symbol of the foundation of Weimar, thus making it impossible for the Weimar Republic to be associated with anything but the defeat and humiliation the German people felt they did not deserve. ...read more.

On March 27th 1930, this prime example of German democracy crumbled, leaving Reichspr�sident Hindenburg to select a new government. His chosen Chancellor was Heinrich Br�ning , whose financial and economic acumen made him a candidate for chancellor and his military background, highlighted by the political lobbying of General Kurt Von Schleicher on his behalf, won him approval from the eternally militarily-inclined Hindenburg. However, Br�ning 's policy of tight credit and a roll-back of all wage and salary increases to further his ultimate aim of liberating Germany from the burden of war reparations did not go down well with the Reichstag, who took less than a month to decide to reject his suggested measures. This was seen by an already anti-Reichstag Hindenburg as a "failure of parliament" and new elections were called to, hopefully, form a more willing Reichstag. Unfortunately, all this served to do was further marginalise any remnants of the Grand Coalition's stability by doing away with the majority held by the parties of the Grand Coalition in favour of the Communists and the National Socialists. The elections saw political shift on a massive scale, with five times the amount of votes going to the Nazis than did in 1928, an impressive 18.3% of the total vote, making the NSDAP the second largest party in the Reichstag after the SPD. There was now no possibility of forging a party coalition and even less possibility of passing the radical bills that Br�ning wished to pass, and so from 1930 to 1932 Br�ning took to basing his administration on the "Notverordnung" (Presidential Emergency Decree) outlined in Article 48, which effectively rendered the parliament with very little power. ...read more.

Unfortunately, this was not to be the case. The date on which Hitler was appointed Chancellor, known to Nazis as the Machtergreifung (seizure of power), is commonly seen as the beginning of Nazi Germany and the end of Weimar. Despite Papen immediately sensing that he had underestimated Hitler's craving for control and requesting that Hindenburg dismiss him following a rapid marginalisation of Papen and the rest of the cabinet by Hitler and his allies, attempts to undo this grave error failed, and by March 1933, the Nazi Party had secured 288 seats in the Reichstag. Hitler was well on his way to dictatorial power. The reasons for the Weimar Republic's collapse are the subject of a long debate. From the analysis within this essay, it would not be unreasonable to concluded that it was doomed from the beginning, with hatred coming from the extremists and dislike coming from almost everyone in-between. Germany had limited democratic traditions and Weimar democracy was widely seen as chaotic, a new experience for everyone involved. And since Weimar politicians had been blamed for the 'Dolchstosslegende' - the popular legitimacy of the government was on shaky ground. No single reason can explain the failure of the Weimar Republic, and instead the collapse of this valiant attempt at democracy is the result of a plethora of terrible mistakes, inexperience, bad luck and a lack of support. Had it been executed better, or even had it been built on a legacy that wasn't the nation's humiliation in a war still known to this day as the Great War, then perhaps it would have had a more optimistic chance at working. But, as it is, the Weimar Republic was merely a brief break for Germany between wars, and, in all honesty, was lucky to survive for the length of time it did. ...read more.