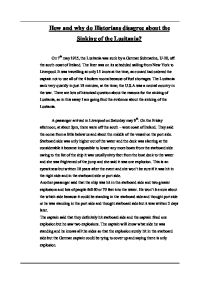 How and why do Historians disagree about the Sinking of the Lusitania?

How and why do Historians disagree about the Sinking of the Lusitania? On 7th may 1915, the Lusitania was sunk by a German Submarine, U-20, off the south coast of Ireland. The liner was on its scheduled sailing from New York to Liverpool. It was travelling at only 15 knots at the time, as cunard had ordered the captain not to use all of the 4 boilers rooms because of fuel shortages. The Lusitania sank very quickly in just 18 minutes, at the time; the U.S.A was a neutral country in the war. There are lots of historical question about the reasons for the sinking of Lusitania, so in this essay I am going find the evidence about the sinking of the Lusitania. A passenger arrived in Liverpool on Saturday may 8th. On the Friday afternoon, at about 2pm, there were off the south - west coast of Ireland. They said the come from a little below us and about the middle of the vessel on the port side. ...read more.

Without the slightest warning, a torpedo from a German submarine struck Lusitania between the third and fourth funnels. There was evidence that a second and perhaps a third torpedo were fired. The Germans published but the American thought nothing will happen because they thought it is only just a notice. A German said the explosion of the torpedo was followed at once by a further explosion of an extremely strong effect. The second explosion must be traced back to the exploding of larger quantities of ammunition in side the ship. That means the Americans are carrying ammunition inside the ship so that got the second explosion, the Germans fired one torpedo but the Americans carrying ammunition which got the second explosion. Now it is American fault because they don't need to carry all this in the ship and it is a passenger ship. The Lusitania has loaded some of the cargo, in the cargo there are 1248 cases of shrapnel shells, 323 bales of fur but Simpson suggests this may actually have been Gun Cotton and in the refrigerated holds: beef, oysters and 'undisclosed cargo' but Simpson says this was probably more ammunition. ...read more.

Steam lines were the pipes which carried high pressure superheated steam from the boilers to the turbines and were located at the level of the torpedo explosion, this steam line explosion are easily the most likely source of second explosion because the steam line is near to the explosion and if its blows up it going make a big damage and it is superheated so this could cause the second explosion. I think the evidence for this Sinking of Lusitania is that there were hit in the starboard side because the German captain known which side he hit, there were two explosions, one is torpedo and another could be the Ammunition, Gun cotton and coal dust because all this are not needed because it's a passenger ship. And the most reliable the Boiler and steam line because if the torpedo hit the one of they it could bring a explosion and there are big and its high - pressure but some of the people think the truth is the that the Lusitania sank quickly because she was not designed to withstand a torpedo hitting her in such a vital spot. ...read more.