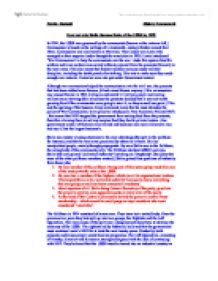 How and why Stalin Became Ruler of the USSR by 1928.

How and why Stalin Became Ruler of the USSR by 1928 In 1924, the USSR was governed by the communists (known as the extreme left.) Communism is based on the writings of a nineteenth- century thinker named Karl Marx, Communism was also known as Marxism. Their leader was Lenin who emerged as their superior leader through the revolution in 1920. Lenin introduced 'War Communism' to help the communists win the war. Under this system food for soldiers and town workers was seized without payment from the peasants (farmers) in the rural areas. This also meant that factory workers were put under military discipline, including the death penalty for striking. This was to make sure they made enough war material. Factories were also put under Government control. Although war communism helped the communists to win the civil war, the peasants that had been robbed were furious, (it had ruined Russia anyway.) War communism also caused famine in 1921, killing an estimated 7.5 million people and leaving millions more starving (this is because the peasants decided that it was not worth growing food if the communists were going to steal it, so they sowed less grain.) ...read more.

The Politburo in 1924 consisted of seven men. They were not a united body. Over the previous two years they had split up into two groups, the Rightists and the Left Opposition. The main cause of the split was a disagreement about how to develop the economy of the USSR. The rightists led by Bukharin, believed that the government must continue Lenin's NEP for at least the next twenty years. Gradually, both peasants and towns people would become prosperous. The Left Opposition, consisting of Trotsky, Zinoviev and Kamenev, strongly disagreed with the idea of continuing with NEP. They believed that the USSR must be turned into an industrial country as quickly as possible. If it remained an agricultural country under the NEP, the west might try to invade the USSR and crush Communism. The left therefore believed that the government should put peasants taxing into paying for the Factories, power stations and railways etc. Although Lenin was ill, he made it clear where he stood in the argument between Right and left; he had doubts about them both. ...read more.

From then on Trotsky was always voted down in the Politburo, booed and voted against by Stalin's supporters in the Party Central Committee. At the end of 1925 Stalin's position was strengthened even more when the Party's congress elected three of his old friends to the Politburo. By 1927 Trotsky and Zinoviev were also expelled from the party. Now that Stalin had got rid of Trotsky, he turned against the rightists who had helped him from the start. Although the rightists gave up a fight, Stalin now had the majority vote in the Politburo and their arguments 'fell on deaf ears.' So they resigned at the start of 1929. Trotsky was now exiled from the USSR in 1929 , making Stalin supreme leader of the USSR. Now Stalin had got rid of Trotsky and his supporters. So now all he had to do was get rid of the rightists. So he turned against the rightists; the people that he had supported first . By now Stalin had the Majority power so when he expelled Bukharin and the rest they 'fell on death ears.' So Stalin's ruthlessness, determination, sneakiness and hard character helped him become the leader of the USSR by 1928. Farzin Dadashi History Coursework ...read more.