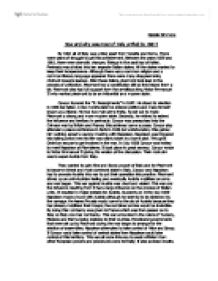 Natalie Simmons How and why was most of Italy unified by 1861? By 1861 all of Italy was united apart from Venetia and Rome. There were years of struggle to get this achievement. Between the years 1859 and 1861, there were dramatic changes. Risings in the past had all failed. Peninsula was divided into ten separate Italian states. All the states wanted to keep their independence. Although there was a common religion and a common literacy language appeared there were many disagreements, mistrust towards leaders. After these failers, piedmont took lead in the process of unification. Piedmont had a constitution still so this helped them a lot. Piedmont also had full support form the ambitious king Victor Emmanuel II who wanted piedmont to be an influential and modern state. Cavour founded the "IL Resorgimento" in 1847. He stood for election in 1848 but failed. A few months later he entered politics and made himself known as a liberal. ...read more.

This war and the influence resulting from it had a large influence on the process of Italian unity. It resulted in major defeats for Austria. Suddenly on 11the July 1859 Napoleon made a truce with Austria although he seemed to be sickened by the carnage. He feared Prussia would come to the aid of Austria because they had already mobilised their troops; the combined armies would be invincible. By doing this Lombardy was given to France which was then passed on to Italy so Italy now had Lombardy. This war amounted in the rulers of Tuscany, Modena and Parma being restored to their duchies. Provisional governments that were set up by Piedmont during the war began to arrange for the election of assemblies. Napoleon attempted to take control of Nice and Savoy. If Cavour could take control of central states then Napoleon could take control of this territory. This was all done this way to avoid criticism from other European powers and procedures done formally; it also avoided revolts. ...read more.

Because he gained this land and then put it under the power of Victor Emmanuel II Italy was mainly united. Cavour was a strong influence on Italian nationalism in the north of Italy because he knew what he wanted to achieve and what others expected him to achieve and he set out to do it. Garibaldi was of main influence in the south of Italy. Garibaldi was a bit to optimistic which created a bit of an obstacle and some of his ideas a little too extreme. He achieved to abolish tax collected on corn being milled into flour which was a standing grievance for the peasants and he won support by promising a redistribution of land. He managed to suppress a number of new peasant revolts and he won the support of landowners though he did loose the peasants support. Overall I fell that the Italian unification was a success, although there was much disagreement between the leaders, they all played their part and contributed some how. They all had the one main aim, to unify Italy although they did have different methods and approaches to getting it. ...read more.