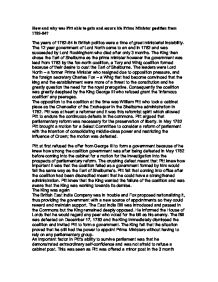 How and why was Pitt able to gain and secure his Prime Minister position from 1782-84? The years of 1782-84 in British politics were a time of great ministerial instability. The 12 year government of Lord North came to an end in 1782 and was succeeded by Lord Rockingham who died after only 3 months. The King then chose the Earl of Shelburne as the prime minister however the government was lead from 1783 by the fox-north coalition, a Tory and Whig coalition formed because of their desire to oust the Earl of Shelburne. The leaders were Lord North - a former Prime Minister who resigned due to opposition pressure, and the foreign secretary Charles Fox - a Whig that had become convinced that the king and the establishment were more of a threat to the constitution and he greatly question the need for the royal prerogative. Consequently the coalition was greatly despised by the King George III who refused grant the 'infamous coalition' any peerages. The opposition to the coalition at the time was William Pitt who took a cabinet place as the Chancellor of the Exchequer in the Shelburne administration in 1782. ...read more.

George created new peerage dignities at the House of Lords at an inundated rate to allow Pitt to maintain a firm majority. After Pitt's appointment the king was able to help Pitt by postponing Parliament for 3 months after the appointment of Pitt in 1784. The commons coalition majority would have possibly immediately tried to defeat Pitt and force his resignation but the King trusted Pitt's self-confidence. Pitt was taking office as the 'King's minister and the knowledge that Pitt had the King's support meant that Pitt was able to stay in Parliament and sustain the crisis years. The factor however that was pivotal to the success of Pitt was his refusal to resign as Prime Minister. Pitt was initially subject to some heavy defeats in the Commons and was defeated on a Motion of No Confidence in January 1784 which was an embarrassment to Pitt's 'mince pie' administration. Pitt however undermined the coalition and defiantly remained in office and spent the first month as PM fending off attacks in parliament from Fox, suffering a number of defeats in the process. Over time however Pitt watched the Coalition's majority shrink as some Members of Parliament left the Opposition to join his side. ...read more.

Early into his period in office Pitt introduced taxes on luxury goods in order to help reduce the national debt. Pitt began to reform his administration by trying to clamp down on smuggling and Pitt made the important choice to not take on a title and therefore stay in the commons. This meant that Pitt would be able to help reforms pass through the commons as he had the influence of George III in the House of Lords. The success of Pitt ministry was helped by the popularity Pitt enjoyed outside of the commons and his position was able to be secured by his rapid movement of reforms of his administrations. The success of Pitt was vitally based on the support of the King. George III influence in the House of Lords helped Pitt to discredit his opposition and throughout Pitt's period in office to push many bills through. However another important factor in the endurance of the Pitt administration was the tenacity of the man himself. Pitt in the midst of great political pressure remained patient and confident in his own ability. Pitt's confidence and belief in himself, which enabled him to refuse a position in Rockingham's administration and form a government, was beneficial to Pitt lasting through the political crisis years of 1782-84. ?? ?? ?? ?? ...read more.