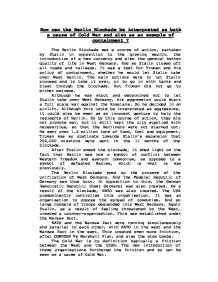 How can the Berlin Blockade be interpreted as both a cause of Cold War and also as an example of containment ?

How can the Berlin Blockade be interpreted as both a cause of Cold War and also as an example of containment ? The Berlin Blockade was a course of action, partaken by Stalin in opposition to the growing wealth, the introduction of a new currency and also the general better quality of life in West Germany. And so Stalin closed off all roads and railways. It was a test for Truman and his policy of containment, whether he would let Stalin take over West Berlin. ...read more.

Although this could be interpreted as aggressive, it could also be seen as an innocent gesture to help the residents of Berlin. So by this course of action, they did not provoke war, but it still kept the city supplied with necessities, so that the Berliners were not starved out. He sent over 1.5 million tons of food, fuel and equipment. Truman was so obstinate towards Stalin's expansion that 200,000 missions were sent in the 11 months of the blockade. After Stalin ended the blockade, it shed light on the fact that Berlin was now a symbol of conflict between Western freedom and eastern communism, as opposed to a symbol of defeated Nazism, which is what is was previously. ...read more.

It was an organisation to oppose the spread of communism. And so large numbers of troops descended into West Germany. Again Stalin, as a result of feeling threatened by the West, created a counter-organisation. This was established under the Warsaw Pact. NATO and the Warsaw Pact were running simultaneously and parallel to each other, with NATO in the west and the Warsaw Pact in the east. This created even more friction, after COMECON Vs Marshall Plan, and also the atom bombs. The Cold War is by definition basically a friction between the West and the USSR. The new introduction of these organisations furthered the friction and so can be seen as a cause of Cold War. ...read more.