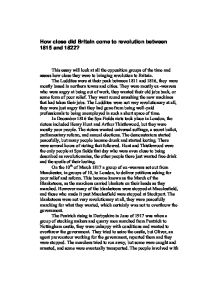 How close did Britain come to revolution between 1815 and 1822? This essay will look at all the opposition groups of the time and assess how close they were to bringing revolution to Britain. The Luddites were at their peak between 1811 and 1816, they were mostly based in northern towns and cities. They were mostly ex-weavers who were angry at being out of work, they wanted their old jobs back, or some form of poor relief. They went round smashing the new machines that had taken their jobs. The Luddites were not very revolutionary at all, they were just angry that they had gone from being well-paid professionals to being unemployed in such a short space of time. ...read more.

This became known as the March of the Blanketeers, as the marchers carried blankets on their heads as they marched. However many of the blanketeers were stopped at Macclesfield, and those who made it past Macclesfield were stopped at Stockport. The blanketeers were not very revolutionary at all, they were peacefully marching for what they wanted, which certainly was not to overthrow the government. The Pentrich rising in Derbyshire in June of 1917 was when a group of stocking makers and quarry men marched from Pentrich to Nottingham castle, they were unhappy with conditions and wanted to overthrow the government. They tried to seize the castle, but Oliver, an agent provocateur working for the government, reported them and they were stopped. ...read more.

The Cato Street conspiracy of 1820 was, without doubt, the most revolutionary plan of the time. A group of spenceans and subversive revolutionaries wanted to overthrow the government by 'blowing-up' Lord Liverpool and his cabinet when they were at dinner, then parading their heads through the streets of London. However, a spy reported the conspirators and they were arrested and either executed or transported. The Cato Street conspirators were the most revolutionary group of the time, and if their plan had been carried through successfully then it is almost definite that there would have been revolution in Britain. In conclusion, Britain never really came close to revolution between 18165 and 1822. There were some revolutionary plans, but none came to fruition due to the government's effective and successful use of spies and agent provocateurs. ...read more.