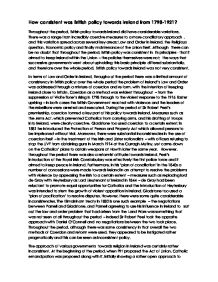 How consistent was British policy towards Ireland from 1798-1921? Throughout the period, British policy towards Ireland did have considerable variations. There was a range from incredibly coercive measures to a more conciliatory approach, and this variation spread across several key areas; Law and Order in Ireland, the Religious question, Economic policy and finally maintenance of the Union itself. Although there can be no doubt that throughout the period, British policy was consistent in its principles - that it aimed to keep Ireland within the Union - the policies themselves were not; the ways that successive governments went about upholding this basic principle differed substantially, and therefore over the whole period, British policy towards Ireland was not very consistent. In terms of Law and Order in Ireland, throughout the period there was a limited amount of consistency in British policy; over the whole period the problem of Ireland's Law and Order was addressed through a mixture of coercion and reform, with the intention of keeping Ireland close to Britain. Coercion as a method was evident throughout - from the suppression of Wolfe Tone's rising in 1798 through to the violent response to the 1916 Easter uprising - in both cases the British Government reacted with violence and the leaders of the rebellions were arrested and executed. ...read more.

The approach of various governments towards religion in Ireland was certainly rather inconsistent. At the beginning of the period, when Pitt proposed the Act of Union, Catholic emancipation was proposed along with it, initially showing a rather open approach to solving the 'Catholic question'. However, it was removed from the final version of the Act, leaving the religious issue unaddressed for the next 30 years and Catholics still with inferior rights in Ireland. Peel's approach to Catholic emancipation was clearly reluctant, and when it was passed in 1829 along with it was a considerable reduction of the franchise, again showing a hostile approach. However, this was turned around by Peel's last ministry in the 1840s - the granting of several key reforms such as the Maynooth grant in 1845 and the Irish colleges Bill of the same year show that Peel himself was inconsistent in his religious policy towards Ireland. Ultimately there was a complete turnaround made by Gladstone in 1869 when he disestablished the Church of Ireland, and enabled Church property to be sold to tenants. This illustrates considerable inconsistency in British policy towards Ireland - from considerable hostility towards Catholics and refusal to grant them rights in order to defend the established church, to its eventual disestablishment. ...read more.

The Land Acts in the later part of the decade also went against the typical treatment of Ireland and it's economic matters - tenant rights had been all but ignored in the first half of the century, and the second Land Act of 1881 and its granting of the '3 Fs' and the land purchase scheme given by the Wyndhams Act in 1903 was a clear turnaround, and completely changed the pattern of land ownership in Ireland; about 9 million acres of land were transferred to tenant hands by 1914, and 75% of tenants were buying their landlords' land. The period saw a considerable change in British economic policy towards Ireland, and therefore it was inconsistent. Throughout the period 1798-1921, there were some quite considerable inconsistencies in British policy towards Ireland. Although to a certain extent it can be seen that their motivating principles behind policy remained relatively similar - in particular the defence of Ireland as part of the union and keeping it as close as possible with the final concession of dominion status in 1921.However, in other areas such as economic policy, the religious problem and sorting out the religious question, there was substantial change throughout. Therefore, overall British policy towards Ireland was not very consistent throughout the period. ...read more.