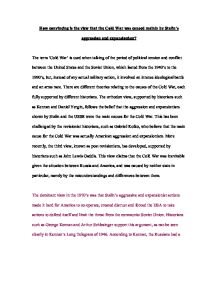 How convincing is the view that the Cold War was caused mainly by Stalin's aggression and expansionism?

How convincing is the view that the Cold War was caused mainly by Stalin's aggression and expansionism? The term 'Cold War' is used when talking of the period of political tension and conflict between the United States and the Soviet Union, which lasted from the 1940's to the 1990's, but, instead of any actual military action, it involved an intense ideological battle and an arms race. There are different theories relating to the causes of the Cold War, each fully supported by different historians. The orthodox view, supported by historians such as Kennan and Daniel Yergin, follows the belief that the aggression and expansionism shown by Stalin and the USSR were the main causes for the Cold War. This has been challenged by the revisionist historians, such as Gabriel Kolko, who believe that the main cause for the Cold War was actually American aggression and expansionism. More recently, the third view, known as post-revisionism, has developed, supported by historians such as John Lewis Gaddis. This view claims that the Cold War was inevitable given the situation between Russia and America, and was caused by neither state in particular, merely by the misunderstandings and differences between them. ...read more.

It's estimated that around 500,000 party members were arrested, executed or sent to labour camps during these trials, and by 1937, around 18 million citizens had been taken to labour camps. According to orthodox historians, these actions were the main reason for the distrust between the USA and the Soviet Union to develop, as it showed Stalin's aggression and untrustworthiness, and suggested to America that any co-operation between the two powers was unlikely. Regarding Stalin's expansionist nature that orthodox historians claim caused the Cold War, evidence such as pro-Soviet communist governments set up in Poland, Romania and Bulgaria in1945-6 and the strong oppression of any opposition. It could also be argued that the only reason the Soviet Union didn't expand during the 1930's was due to the lack of opportunity to do so. When the opportunity arose, in the form of the Nazi-Soviet Pact in 1939, the Soviets managed to annexe half of Poland and seized Estonia Latvia and Lithuania over the following year. Historians have used these events to claim that Stalin was desperate to expand the influence of communism across Eastern Europe, and therefore lends support to the orthodox view. ...read more.

The constant delay of the Second Front by Roosevelt is used as evidence by revisionists that America was the expansionist state, and was always against communism. This is also supported by the British and American support for the Whites in the Russian Civil war in 1918, and the Marshall Plan. Many historians, such as Walter LaFeber argue that the Marshall Plan is evidence of American economic imperialism, and the efforts to gain control over Western Europe by providing generous amounts of financial aid are seen as an attempt to repel communism by building up capitalism in Western Europe. The revisionist belief that America was also the more aggressive of the two states is supported by evidence such as the atomic bomb, which also justifies Stalin's paranoia about the hostility of the west towards communism. According to Gar Alperovitz, the bombs were used on an already defeated Japan not to win the war, but to intimidate the Soviets, suggesting that America would use nuclear weapons to enable them to structure a postwar world around their interests. 200,000 Japanese citizens died in the two explosions, and revisionist historians claim this shows America's lack of concern for humanity and desire to appear powerful, and therefore have power over the world. ...read more.