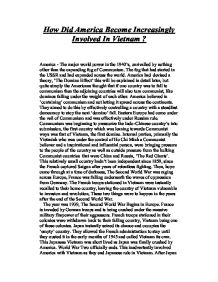 How Did America Become Increasingly Involved In Vietnam

How Did America Become Increasingly Involved In Vietnam ? America - The major world power in the 1940's, unrivalled by nothing other than the expanding fog of Communism. The fog that had started in the USSR and had expanded across the world. America had devised a theory, 'The Domino Effect' this will be explained in detail later, but quite simply the Americans thought that if one country was to fall to communism then the adjoining countries will also turn communist, like dominos falling under the weight of each other. America believed in 'containing' communism and not letting it spread across the continents. They aimed to do this by effectively controlling a country with a steadfast democracy to stop the next 'domino' fall. Eastern Europe had come under the veil of Communism and was effectively under Russian rule. Communism was beginning to pressurize the Indo-Chinese country's into submission, the first country which was leaning towards Communist ways was that of Vietnam, the first domino. Internal parties, primarily the Vietminh who was under the control of Ho Chi Minh a Communist believer and a inspirational and influential person, were bringing pressure to the people of the country as well as outside pressure from the hulking Communist countries that were China and Russia, 'The Red Giants'. This relatively small country hadn't been independent since 1859, since the French captured Saigon after years of relentless fighting. ...read more.

They aimed to stop this from happening by halting the Communist party, the Vietminh, from taking control. In fact, during the French Indochina War, the war effort comprised of over 80 % of American financial support, America had a BIG agenda with military aid amounting to more than $500 million by 1951. They were using French military to do what THEY wanted. The French military efforts reached a eventual climax at the battle of Dien Bien Phu (1954). France was resolutely crushed and at the Geneva Conference. America had failed in stopping the Vietminh. Vietnam was split into separate countries on the 17th parallel, The Communist backed Ho Chi Minh regime in the north, and the French backed government of Bao Dai in the south. At the same time of the partition, the President of the USA (President Eisenhower) sent the first U.S. advisors to South Vietnam to train the South Vietnamese Army (ARVN). A few months after the partition of Vietnam in 1954, South Vietnam withdrew from the French Union and attained complete sovereignty. In a referendum held in 1955, the electorate deposed Bao Dai as chief of state and approved a republic with Ngo Dinh Diem as president. The republic, was recognized as the legal government of South Vietnam by the United States and other western powers. North Vietnam, meanwhile, continued to be dominated by Ho Chi Minh, who maintained good relations with both China and the USSR, receiving enormous aid from both countries while skilfully protecting the independence of his country. ...read more.

In 1965, the US Congress (A branch of the US government) provided $2.4 Billion for the Vietnam war effort, which is just a drop in the ocean compared to the final official estimate which was about $597 billion. Soon after the bombing American marines were dropped into south Vietnam, the war had become 'Americanised' This 'timeline' shows very plainly that the US become increasingly involved in Vietnam beginning with political and financial aid to the French to halt the spread of the Vietminh communist ideas. Then, when the French were defeated, the US became militarily involved starting with 'advisors' and equipment to the South Vietnamese army. Two aircraft carriers are then reportedly attacked which then gives the 'green light' for bombing in North Vietnam. This triggered attacks from the NVA (North Vietnamese Army) all across the country of South Vietnam which leads the US to deploy the marines in South Vietnam. Simple logic would presume that the way to stop the spread of communism in South Vietnam was to 'cut the head off the beast' and land troops in North Vietnam. But the political implications would be enormous, as North Vietnam had Chinese and Russian backing, 'The Red Giants'. US money and men began to spill into the country, Which never came to no overall effect. The statistics of the 'body-count' would show the US and South Vietnamese to be winning. Nothing was further from the truth ... ?? ?? ?? ?? ...read more.