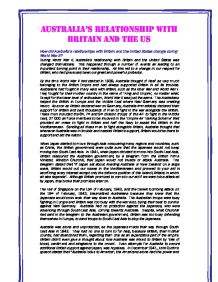 How did Australia's relationships with Britain and the United States change during World War II?

Australia's Relationship with Britain and the US How did Australia's relationships with Britain and the United States change during World War II? During World War II, Australia's relationship with Britain and the United States was changed dramatically. This happened through a number of events all leading to an important turning point in their relationship. All this led to a change in our respect for Britain, who had previously been our great and powerful protector. By the time World War II had started in 1939, Australia thought of itself as very much belonging to the British Empire and had always supported Britain in all its troubles. Australians had fought in many wars with Britain, such as the Boer War and World War I. They fought for their mother country in the name of 'King and Empire', no matter what. Except for the lower level of enthusiasm, World War II was just the same. The Australians helped the British in Europe and the Middle East where Nazi Germany was creating havoc. ...read more.

The telegram stated that "if Japan set about Invading Australia or New Zealand on a large scale, Britain would cut our losses in the Mediterranean and proceed to your aid in sacrificing every interest except only the defence position of this island (Britain) in which all else depends". Although Britain promised to come to our aid if we were to be attacked by Japan, they broke their promises later on. The Fall of Singapore on the 15th of February, 1942, and the Darwin bombing attack on the 19th of February, 1942, traumatized Australians because they knew that the Japanese would soon work their way down to Australia. The Australian troops were busy fighting in Europe and Britain was too busy with the war also, trying their best to survive against Nazi Germany. Australia had no protection against the Japanese, who were advancing through South-East Asia, coming towards Australia. Despite, what Churchill had said in the telegram to the Australian government, Britain was too busy defending themselves in Europe, to send troops to South-East Asia to stop the Japanese. ...read more.

It is almost certain that America would have come to help even if Curtin had not made such a public appeal about it, because Australia was the only one point from where a counter-offensive against the Japanese could have been launched. Their plans were to launch a counter-offensive against the Japanese because of the Pearl Harbor incident on the 7th of December, 1941. Australia could do nothing but follow the plans of the US military force, because Britain was no longer there to help and the US was the only hope they had. Therefore, we can say that World War II caused Australia's relationship with both, Britain and the United States to change. Australia's relationship with Britain used to be quite strong and Australia had thought of Britain as being their most powerful mother country and protector. After the war, Australia's perception of Britain changed and their links with the US increased, because it was the US who had helped them when they were in need during World War II. Australia, in the past, had fought wars for Britain, but after World War II they fought America's wars, such as the Vietnam and Korea Wars. ...read more.