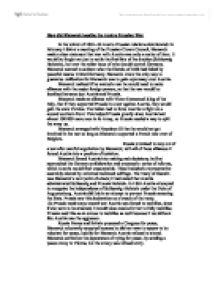 How did Bismarck Localise the Austro Prussian War

How did Bismarck localise the Austro Prussian War In the winter of 1865- 66 Austro Prussian relations deteriorated. In February 1866 at a meeting of the Prussian Crown Council, Bismarck made a clear statement that war with Austria was only a matter of time. It would be fought not just to settle the final fate of the duchies (Schleswig Holstein), but over the wider issue of who should control Germany. Bismarck wanted to achieve what the liberals of 1848 had failed by peaceful means: United Germany. Bismarck knew the only way to guarantee unification for Bismarck was to gain supremacy over Austria. Bismarck realised if he wanted a war he would need to make alliances with the major foreign powers, so that the war would be localised between just Austria and Prussia. Bismarck made an alliance with Victor Emmanuel King of the Italy, that if they supported Prussia in a war against Austria, they would gain the state Ventica. ...read more.

In 1865 Austria attempted to recognise the independence of Schleswig-Holstein under the Duke of Augustenburg. Austria did this in an attempt to prevent Prussia annexing the State. Prussia saw this declaration as a breach of the treaty. So Prussia made steps toward war Austria was forced to mobilise, since if she were to be attacked, it would takes weeks for her to fully mobilise. Prussia used this as an excuse to mobilise as well because it would look like Austria was the aggressor. Russia France and Britain proposed a Congress for peace, Bismarck reluctantly accepted because he did not want to appear to be reluctant for peace, luckily for Bismarck Austria refused to attend. Bismarck carried on the appearance of trying for peace, by sending a peace envoy to Vienna, but the envoy was refused entry. ...read more.

The issuing of the Dreyse gun (the Needle gun) it allowed Prussian troops to fire faster and more accurately than their Austrian counterparts. The military reforms had allowed Prussia a larger standing Army that was better trained. This new training focus on the leadership on the Battlefield, it gave greater control to the NCOs and junior officers. So allowed Prussia to a stronger military power and overwhelm Austria Bismarck created the War and manipulated it through out with his forward thinking, the main reason he achieved a localised war is the fact he was able to create alliance as out manoeuvre Austria at every stage. If Bismarck had not down the ground work before the war, the war would of dragged on for many months and exhausted both countries and allowed France to become a more important power in Europe. Had the war been a drawn out event German unification may of taken decades longer or never of happened ...read more.