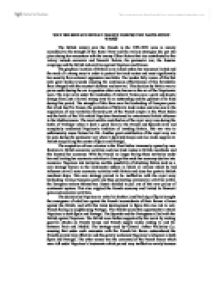 How did Britain defeat France during the Napoleonic wars?

WHY DID BRITAIN DEFEAT FRANCE DURING THE NAPOLEONIC WARS? The British victory over the French in the 1793-1815 wars in mainly accredited to the strength of the Royal Navy and the various strategies she put into place during her encounters with the enemy. Other factors that also contributed to this victory include economic and financial factors, the peninsular war, the Russian campaign and the British led coalition against Napoleon and France. The graphical location of Britain as an island makes her resources limited and the need of a strong navy in order to protect her trade routes and most significantly her security from external aggression inevitable. The leaders fully aware of this fact took great strides towards ensuring the continuous effectiveness of this formidable force charged with the country's defence and survival. This decision by Britain was to prove useful during the era in question other wise known as the era of the Napoleonic wars. The royal navy under the leadership of Admiral Nelson saw a great and drastic change from just a normal strong navy to an outstanding and the greatest of its kind during this period. ...read more.

their former alliance against the British, and with this latest development in Spain this also led to anti-French feeling in neighbouring Portugal. The British seized this opportunity to attack Napoleon in both Spain and Portugal. The Spanish and the Portuguese allied with the British against Napoleon. The British were further supported by the locals by making guerrilla attacks on French troops and French supply routes leading to and fro between Paris and Madrid. The strategy used by General Arthur Wellesley (i.e. ensuring that under each encounter with the French his forces outnumbered the French) proved very effective and this greatly weakened Napoleon's influence in both Spain and Portugal. The other reason was the command of the French forces which were left under Napoleon's lieutenants which proved very ineffective mainly because of the fact that he was concentrating in Eastern Europe. Thus this factors led to the lost of French hold of Spain and Portugal. Napoleon fully concentrating his forces towards his Russian campaign and giving little or no attention to events in Western Europe. When Napoleon earlier set out on his campaign he had no intention of going beyond Poland because he had underestimated the rebellion and expected a rapid surrender and result into a victory for him. ...read more.

This they succeeded in forcing the emperor to abdicate and he was sent into exile to Elba with a thousand men selected by him for his personal security. A hundred days later he escaped from Elba and made a return to France with an attempt to take his empire back and also face the British led coalition against him. This coalition of European powers namely; Britain, Prussia, Austria and Russia fought against Napoleon until the final showdown at the battle of Waterloo when Napoleon himself and the great British army General, Wellesley, for the first and last time came into face to face battle against each other and with the support of the Prussian army under Blucher, and with this combined force they were able to deal a death blow to Napoleon's army and finally ensured his army was totally weakened until the emperor fled and was later captured and sent on exile to the far away island of St. Helena. The above detailed factors can be said to be the reason for British victory over the French and Napoleon in person, but most significant of them is the strength of her navy and the strategies implemented by those charged with the responsibility of the royal navy. By ABUBAKAR A ABUBAKAR ...read more.