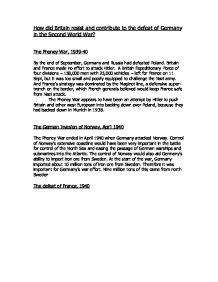 How did Britain resist and contribute to the defeat of Germany in the Second World War?

How did Britain resist and contribute to the defeat of Germany in the Second World War? The Phoney War, 1939-40 By the end of September, Germany and Russia had defeated Poland. Britain and France made no effort to attack Hitler. A British Expeditionary Force of four divisions - 158,000 men with 25,000 vehicles - left for France on 11 Sept, but it was too small and poorly equipped to challenge the Nazi army. And France's strategy was dominated by the Maginot line, a defensive super-trench on the border, which French generals believed would keep France safe from Nazi attack. The Phoney War appears to have been an attempt by Hitler to push Britain and other west European into backing down over Poland, because they had backed down in Munich in 1938. The German invasion of Norway, April 1940 The Phoney War ended in April 1940 when Germany attacked Norway. Control of Norway's extensive coastline would have been very important in the battle for control of the North Sea and easing the passage of German warships and submarines into the Atlantic. ...read more.

The Germans needed to control the English Channel to launch her invasion of Britain which the Germans code-named Operation Sea lion. At the start of the war, Germany had 4,000 aircraft compared to Britain's front-line strength of 1,660. By the time of the fall of France, the Luftwaffe this was the German air force had 3,000 planes based in northwest Europe alone including 1,400 bombers, 300 dive bombers, 800 single engine fighter planes and 240 twin engine fighter bombers. From August 23rd to September 6th, the Luftwaffe started nighttime bombing raids on cities. The RAF was also badly hit with 6 out of 7 main fighter bases in southeastern England being put out of action. Biggen Hill was wrecked. However, for all this apparent success, the Luftwaffe was losing more planes than the RAF was - 1000 German losses to 550 RAF. The Battle of The Atlantic The fall of France allowed U-Boats to operate far into the Atlantic from French ports. Nazi shipyards produced about 20 new U-boats a months, and British merchant shipping losses grew. ...read more.

It was only in 1944 that we changed targets and bombed strategic targets such as railway lines, bridges, motorways etc. and Germany's ability to make industrial goods was smashed. D-Day The planning for D-Day began in 1943 at the Quebec Conference in Canada. The planned invasion was given the code word "Overlord". It was believed by the Allies that the Germans expected an Allied attack at the nearest point to occupied Europe the Pays de Calais. Their plan was for an attack on the beaches of Normandy, which would include a much longer crossing of the English Channel. Technical planning for D-Day had to start early. The beaches were secretly surveyed so that the Allies could find out about the sand shingle on the beaches. The planned landing would require a large number of tanks and armoured vehicles to be landed along with infantry. Landing on the Normandy beaches was grim on the first day, 3600 soldiers died or wounded, and Americans lost 6000 men, however 150,000 allied soldiers had landed. Even so, by the end of D-Day, 132,715 men were ashore, and this rose quickly over the next few days - by 12 June 2 million men were in Normandy. ...read more.