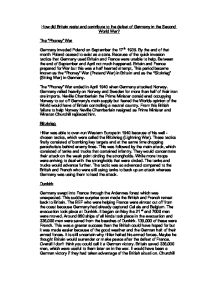 How did Britain resist and contribute to the defeat of Germany in the Second World War?

How did Britain resist and contribute to the defeat of Germany in the Second World War? The "Phoney" War Germany invaded Poland on September the 17th 1939. By the end of that month Poland ceased to exist as a state. Because of the quick invasion tactics that Germany used Britain and France were unable to help. Between the end of September and April not much happened. Britain and France prepared for War but this was a half hearted attempt, This period became known as the "Phoney" War (Pretend War) in Britain and as the "Sitzkrieg" (Sitting War) in Germany. The "Phoney" War ended in April 1940 when Germany attacked Norway. Germany relied heavily on Norway and Sweden for more than half of their iron ore imports. Neville Chamberlain the Prime Minister considered occupying Norway to cut off Germany's main supply but feared the Worlds opinion of the World would have of Britain controlling a neutral country. From this British failure to help Norway Neville Chamberlain resigned as Prime Minister and Winston Churchill replaced him. ...read more.

It would have been a German victory if they had taken advantage of the British situation. Churchill used this success to his advantage raising the morale of Britain. A lot of equipment was lost because it had to be left on the beach. The Battle of Britain Hitler planned to invade Britain to do this he believed that he needed air superiority. Germany started to attack British ports, airfields and radar stations. The RAF defended hard but came very close to defeat. New planes were being built quick enough it was the fact that they didn't have enough pilots to fly them. It took a while to train a pilot. It was a chance in the tactics of Hitler that saved Britain from air defeat. Germany focused on demoralising Britain by bombing major cities. On September the 7th Germany focused on bombing major cities. This was the end of the Battle of Britain and the start of the Blitz. The Over a period of 77 days London was bombed every night except one. ...read more.

Overall I think that the bombing was worth it because it held Germany back from producing its full potential. D-Day D-Day was the British and USA invasion of German occupied France to relieve the pressure on the Soviet Union. The plan was to land at five different places in Normandy code named Utah, Omaha, Gold, Juno and Sword. The first two were the responsibility of the Americans and the other three were of Britain and the Canadians. Dwight D. Eisenhower, the US general was in overall command. He led the Germans to believe that the main attack was going to be in Calais. He did this by setting up a dummy military camp in Kent the shortest crossing from Calais and by repeatedly bombing Calais. From this most Germans believed the attack would be in Calais. The attack was planned for the 5th of June but it was delayed for 24 hours due to bad weather conditions. Each of the five beaches was taken. Also there was a British and American airdrop which were both successful. ...read more.