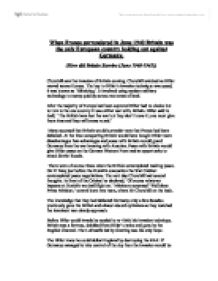 When France surrendered in June 1940 Britain was the only European country holding out against Germany. (How did Britain Survive (June 1940-1943)) Churchill saw the invasion of Britain coming. Churchill watched as Hitler moved across Europe. The key to Hitler's invasion technique was speed, it was known as 'Blitzkrieg'. It involved using modern military technology to sweep quickly across vast areas of land. After the majority of Europe had been captured Hitler had no choice but to turn to the one country it was still at war with, Britain. Hitler said to Jodl, ' The British have lost the war but they don't know it; one must give them time and they will come round.' Many assumed that Britain would surrender now that France had been defeated. At the time conquering Britain would have bought Hitler more disadvantages than advantages and peace with Britain would guard Germany from the war brewing with America. Peace with Britain would give Hitler peace on the German Western Front and an opportunity to attack Soviet Russia. There were of course times when the British contemplated making peace. On 27 May just before the Dunkirk evacuation the War Cabinet contemplated peace negotiations. The next day Churchill had second thoughts. In front of the Cabinet he declared, 'Of course whatever happens at Dunkirk we shall fight on.' ...read more.

Germany decided right from the beginning of the war that they had to cut off these supplies to Britain. The German U-boats were very effective in 1940m the Germans sunk over 1000 ships. In 1941 the allies lost 1300 ships. In 1942 they lost 1661 ships. In 1943 the navy only had 2 months of fuel left. Churchill realised how close the Battle of the Atlantic came to destroying the British. Churchill wrote after the war, ' the only thing that ever really frightened me was the U-boat peril'. Several factors allowed Britain to survive the battle. British intelligence was able to break the German code and was able to guide the convoys away from the U-boats. New weapons were developed to combat the German submarines. Long-range bombers began escorting the convoys across the Atlantic; they were fitted with special radar etc... Radio linked ships and aircraft, which were fighting the U-boats, and they would make use of the information acquired. The shipping production level rose and the USA's shipyards were turning out huge numbers of cargo ships. Soon the Allies were making more ships then could be sunk. The merchant navy men were courageous, patriotic and heroic they ensured that the supplies got through to Britain. Churchill then in 1943 gave top priority to the fighting the Battle of the Atlantic. ...read more.

He celebrated with every victory but at the same time he did not try to delude the British people with false victories. For example he described the evacuation of Dunkirk as miraculous but also said that they wouldn't win the war by running away. Hitler had failed to invade Britain; this to him was not a big deal as it gave him the opportunity to attack Russia. Though he continued to bomb Britain the focus of the war turned. Hitler was now facing war on two fronts had he conquered one, chances are the other would have fallen too but with the army divided on different sides of the continent Hitler was no longer as sure of victory. Had Russia been defeated Hitler perhaps would have been able to Hitler had re-focus his attack on Britain and perhaps win but he had no hope of winning the war on two fronts . This period of time while Hitler was focussed on Russia gave Britain a time to re-group and prepare for invading the continent. During this time Japan bombed Pearl Harbour and America entered the war. Hitler at this point was already in an uncomfortable situation with war on two fronts and Hitler, no longer sure of victory, declared war against America. At this point Britain was saved, she was no longer alone. Britain emerged from what seemed to be certain defeat with a smile on her face, able to win the war. ...read more.