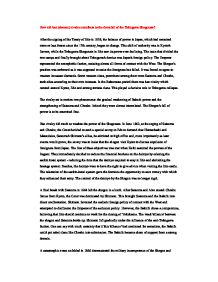 How did han (domain) rivalry contribute to the downfall of the Tokugawa Shogunate?

How did han (domain) rivalry contribute to the downfall of the Tokugawa Shogunate? After the signing of the Treaty of Edo in 1858, the balance of power in Japan, which had remained more or less frozen since the 17th century, began to change. This shift of authority was in Kyoto's flavour, while the Tokugawa Shogunate in Edo saw its power ever declining. The issue that divided the two camps and finally brought about Tokugawa's demise was Japan's foreign policy. The Emperor represented the xenophobic faction, resisting almost all forms of contact with the West. The Shogun's position was awkward as it was supposed to resist the foreigners but failed. It was forced to agree to western incessant demands. Some western clans, prominent among them were Satsuma and Choshu, took sides according to their own interests. In the Bakumatsu period there was han rivalry which centred around Kyoto, Edo and among tomaza clans. ...read more.

Shimazu favoured the realistic foreign policy of contact with the West and attempted to disillusion the Emperor of the seclusion policy. However, the Bakufu chose a compromise, believing that Edo should continue to work for the closing of Yokohama. The weak 'alliance' between the shogun and Satsuma broke up. Shimazu fell gradually under the influence of the anti-Tokugawa faction. One can say with much certainty that if this 'alliance' had continued for sometime, the Bakufu could put rebel clans like Choshu into submission. The Bakufu became shorn of support from a strong domain. A catastrophic event unfolded in 1866 demonstrated the military incompetence of the Shogun and assured Satsuma and Choshu that the time for them to topple had become well-nigh. By the end of 1864 the pro-Bakufu party in Choshu was overthrown by the return of the radicals. Sensing that Choshu would become a trouble spot if it was not checked, the Shogun organized another expedition against Choshu despite heavy opposition from other domains. ...read more.

This set off military reform learning western military technology which brought success against the Bakufu in 1866. Lastly, the Satsuma-Choshu alliance of 1866 was an important achievement by the two traditionally rival clans without which the downfall of the Bakufu in 1868 would be placed in serious doubt. In 1866 the radicals took over the government of Choshu and single-mindedly aimed at the destruction of the Bakufu. Despite the opposition from many domains, an ultimatum was sent to Choshu by the Shogun laying out the terms of submission. The ultimatum was ignored. Meanwhile, Satsuma and Choshu had been gradually overcoming their suspicions of each other with the help of refugees from Tosa. Finally they reached an alliance in 1866, concluded secretly by Kido Koin and Saigo Takamori. Satsuma agreed to use its influence at Court to restore Choshu to favour. And most significantly, both were bound to topple the Bakufu and restore the emperor's status. This alliance provided a solid core of military strength which made it possible to meet the Tokugawa on equal terms. ...read more.