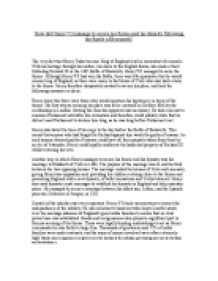 How did Henry VII manage to secure his throne and his dynasty following the Battle of Bosworth?

﻿How did Henry VII manage to secure his throne and his dynasty following the Battle of Bosworth? The very fact that Henry Tudor became King of England at all is somewhat of a miracle. With his heritage through his mother, his claim to the English throne was weak at best. Defeating Richard III in the 1485 Battle of Bosworth, Henry VII managed to seize the throne. Although Henry VII had won the Battle, there was little guarantee that he would remain king of England, as there were many in the House of York who also had a claim to the throne. Henry therefore desperately needed to secure his place, and took the following measures to do so. ...read more.

This meant that anyone who had fought for Richard against him would be guilty of treason. As such anyone deemed guilty of treason could have all their property taken from them by an Act of Attainder, Henry could legally confiscate the lands and property of Richard III whilst restoring his own. Another way in which Henry manages to secure his throne and his dynasty was his marriage to Elizabeth of York in 1486. The purpose of the marriage was to end the feud between the two opposing houses. The marriage united the houses of York and Lancaster, giving Henry less opposition and providing his children a strong claim to the throne and presenting England with a new dynasty, of both Lancastrian and Yorkist descent. ...read more.

These were legally binding undertakings to act as Henry commanded or else forfeit a large fine. Thousands of gentlemen and 75% of noble families were under contracts, and the sums of money involved were often extremely high. Bonds and recognisances helped secure the loyalty of the nobility, preventing any sort of rebellion and disobedience. In conclusion, following the Battle of Bosworth, by getting the churches approval, honoring his pledge of marriage and keeping control of the nobility, Henry managed to increase the security of his place on the throne. He ended the feud between the two opposing houses, giving his children a strong claim to the throne. By marrying off his children, he established his dynasty in England whilst maintaining peace. With the use of bonds and recognisances, Henry kept control of the nobility, restricting their independence and ensuring no rival power bases were able to form. ...read more.