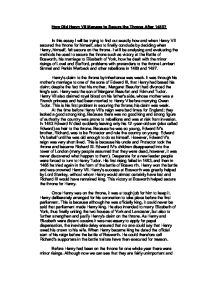 How Did Henry VII Manage to Secure the Throne After 1485?

How Did Henry VII Manage to Secure the Throne After 1485? In this essay I will be trying to find out exactly how and when Henry VII secured the throne for himself, also to finally conclude by deciding when Henry, himself, felt secure on the throne. I will be analysing and evaluating the methods he used to secure the throne such as victory at the Battle of Bosworth, his marriage to Elizabeth of York, how he dealt with the minor risings of Lovel and Stafford, problems with pretenders to the throne Lambert Simnel and Perkin Warbeck and other rebellions in 1489 and 1497. Henry's claim to the throne by inheritance was weak. It was through his mother's marriage to one of the sons of Edward III, that Henry had based his claim; despite the fact that his mother, Margaret Beaufort had divorced the king's son. Henry was the son of Margaret Beaufort and Edmund Tudor. Henry VII also claimed royal blood on his father's side, whose mother was a French princess and had been married to Henry V before marrying Owen Tudor. This is his first problem in securing the throne; his claim was weak. At the time before Henry VII's reign were bad times for England; they lacked a good strong king. Because there was no good king and strong figure of authority the country was prone to rebellions and was at risk from invasion. ...read more.

The risings started when Henry was travelling north to York to establish his presence as king, and secure their support. As Henry travelled north three lords (Lord Lovel and brothers Lord Thomas Stafford and Lord Humphrey Stafford) broke sanctuary. Lovel travelled north to waylay the king; meanwhile the Stafford's went to stir a rebellion in the west. Henry was aware of this, but in order to show his confidence as king and act like he was not worried he continued to York and sent an armed force to the rebels. There they offered the rebels a pardon, or if they fought and lost excommunication and death. The rebels dispersed, and Lovel was not captured. However, the Stafford's were caught. Humphrey was executed, but pardoned afterwards and remained loyal. Henry harshly punished the ringleaders of the rebellion, but was merciful to the others, this proved successful and Henry was supported for it. It showed that he was a strong king, he was able to deal with the rebellion appropriately, but was merciful where mercy was due. Henry was now seen as the upholder of justice and order. Another threat to Henry were the two main pretenders to the throne, Lambert Simnel and Perkin Warbeck. Lambert Simnel was less of a threat to Henry than Warbeck; but still both worried Henry. ...read more.

This caused resentment especially in Yorkshire as they were suffering from a bad harvest the previous summer, also the fact that people further north were exempt from the tax as there were expected to defend the country from the Scottish; this further angered the people of Yorkshire. The Earl of Northumberland put their case to Henry, but he would not negotiate. When the Earl returned with the news he was murdered, presumably by angry rebels. The Earl of Surrey defeated the rebels outside York. Henry travelled north to pardon the prisoners, but he did not receive any more of his tax. In conclusion I doubt that Henry ever felt entirely secure on the throne. This is because he was opposed even by some of his own supporters, if it was in their own interests to do so. Most people's loyalties could easily be swayed if it suited them. In order for him to feel completely safe Henry would have to rely on the loyalties of others, which would not be advised. However, Henry was a good king; arguable the best king that England had seen for sometime. Henry was a successful king in many areas such as government, trade and the restoration of law and order. Due to his success in these areas it is easy to overlook the troubles he endured in order to keep the throne. It is a credit to Henry that he managed to hand the throne in tact to his son, where three previous kings had not managed to do so. ...read more.