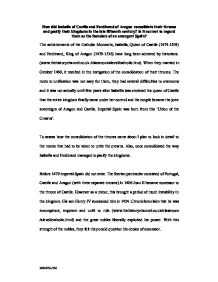 How did Isabella of Castileand Ferdinand of Aragonconsolidate their thrones and pacify their kingdoms in the late fifteenth century? Is it correct to regard them as the founders of an emergent Spain?

How did Isabella of Castile and Ferdinand of Aragon consolidate their thrones and pacify their kingdoms in the late fifteenth century? Is it correct to regard them as the founders of an emergent Spain? The achievements of the Catholic Monarchs, Isabella, Queen of Castile (1474-1504) and Ferdinand, King of Aragon (1479-1516) have long been admired by historians. (www.thehistorychannel.co.uk /classroom/alevel/catholic.htm). When they married in October 1469, it resulted in the instigation of the consolidation of their thrones. The route to unification was not easy for them, they had several difficulties to overcome and it was not actually until five years after Isabella was crowned the queen of Castile that the entire kingdom finally came under her control and the couple became the joint sovereigns of Aragon and Castile. Imperial Spain was born from this 'Union of the Crowns'. To assess how the consolidation of the thrones came about I plan to look in detail to the routes that had to be taken to unite the crowns. Also, once consolidated the way Isabella and Ferdinand managed to pacify the kingdoms. Before 1479 imperial Spain did not exist. The Iberian peninsular consisted of Portugal, Castile and Aragon (with three separate crowns).In 1406 Juan II became successor to the throne of Castile. However as a minor, this brought a period of much instability in the kingdom. His son Henry IV succeeded him in 1454. ...read more.

Isabella was eventually victorious however with the assistance of Ferdinand who negotiated and used his militaristic skills giving Isabella advantage and maintaining the theory that Juana was not the true daughter of Henry IV. It was a slow process but eventually in 1479 Castile came under Isabella's control. The same year Juan II of Aragon died and Ferdinand and Isabella eventually became the joint sovereign of Castile and Aragon. The Union of Crowns was regarded as a union of equals although each kingdom preserved its own social, political, and economic realities.. Aragon was an empire in decline while Castile's empire was just beginning to rise under its energetic young queen. Isabella was a devoted Christian and this religious conviction motivated her campaign to expel the Moors and Jews from Spain and spread Christianity to the rest of the world. Ferdinand, on the other hand, focused on Aragon's Italian possessions and a series of royal marriages with the other royal houses of Europe. Even so Ferdinand and Isabella worked together to reform Spain. Until Queen Isabella's victory, politically Castile had been in turmoil. During the opening years of the fifteenth century the Castilian kings had become pawns in the hands of the Castilian aristocracy who exercised a great deal of political power as they had gained control over the majority of the land taken from the Moors. They represented only 3 per cent of the population but owned almost 50 per cent of the land in Castile, leaving the remaining land divided between the Crown and the Church. ...read more.

But all the custom barriers that separated the kingdoms remained fully on force, and their institutions were kept separate. Going back to the medieval ages the crowns of Castile and Aragon had evolved in dissimilar ways, had different ideals and distinct institutions. The major differences were Castile was much larger, occupying almost four times that of Aragon and holding almost 80 per cent of the population, castile was essentially a united state with a single government; it had one Cortes, one tax structure, one language and one coinage, all this added to its size and population gave it greater political initiative than Aragon where each realm was governed independently by its own Cortes. With these major distinctions in mind it would and no attempt to change any of them, it is hard to say that Isabella and Ferdinand are the founders of an emergent Spain. It is true that they consolidated the thrones and pacified their kingdoms. But the only real unification was made by the crowns, not by the people. Also it is true that if it wasn't for them, it is likely that there would be no Spain today. If Juana had become sovereign, the world as we know it today may have been very different as it was Isabella who funded Columbus' trip to America and without her Spanish America may not exist. They may not have set out to unify Spain but given time that is precisely what has happened. Along with the peace and order they brought, the emergence of Spain they can also take responsibility for. ...read more.