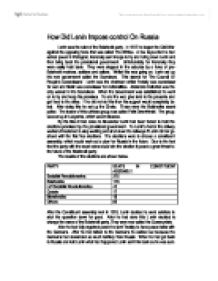 How Did Lenin Impose control On Russia.

How Did Lenin Impose control On Russia Lenin was the ruler of the Bolshevik party. In 1917 he began the Civil War against the opposing force that was called The Whites. A few days after he had seized power in Petrograd, Kerensky sent troops to try and bring down Lenin and then bring back the provisional government. Unfortunately for Kerensky they were easily held back. They were stopped in the suburbs by a force of pro-Bolshevik workers, soldiers and sailors. Whilst this was going on, Lenin set up his new government called the Sovnakom. This stands for 'The Council Of People's Commissars'. Lenin was the chairman whilst Trotsky was commissar for war and Stalin was commissar for nationalities. Alexandra Kollontai was the only woman in the Sovnakom. When the Government was established he went on to try and keep his promises. To end the war, give land to the presents and get food to the cities. If he did not do this then his support would completely be lost. ...read more.

The outcome of this treaty, which was, called the Brest-Litovsk treaty, was a huge amount of land being lost from Russia. When it came to the summer of 1918 the communists found themselves under attack. This was the beginning of the vicious civil war. Lenin only controlled a small part of Russia and unfortunately his enemies were determined that he should not stay in power for long. There were three main sides: THE REDS: These were the Bolsheviks or communists. The reason that they were called the reds is that red was the colour of communism. THE WHITES: This group consisted of all the people against the Communists, these were - Tsarists and Nobles, middle class constitutional democrats, Mensheviks and socialist revolutionaries. They got their name from the fact that the Tsarist officers always wore white uniforms. This meant that they were always associated with the Tsar and the old system of Government. THE GREENS: These were independent groups of nationalists who went around and raided villages and towns. ...read more.

Trotsky was very courageous, this gave his men lots of confidence. He had a special train made that would send him and his men to the place where the fighting was hardest. The Whites armies had absolutely no trust in one another. This meant that the Reds were able to pick of the armies one by one. The whites had problems inside their own separate armies. There was often fighting due to the fact that they all had there owned separate beliefs and aims. One of the main disadvantages that Reds faced was the fact that the Whites had the support of all the foreign powers. These were Britain, France, Japan and the USA. They all sent forces to help them beat the Reds. The foreign countries were too scared to see Communism spread into Europe. Although they supplied the Whites with expensive weapons none of the foreign men actually fought in the war. They were all tired of war and some of the soldiers were sympathetic to the Bolshevik cause. Overall the foreign armies were half-hearted and the attack did not cause damage to the Bolshevik cause. ...read more.