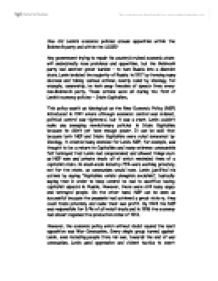 How did Lenin's economic policies arouse opposition within the Bolshevik party and within the USSR?

How did Lenin's economic policies arouse opposition within the Bolshevik party and within the USSR? Any government trying to repair its country's ruined economic state will undoubtedly have problems and opposition, but the Bolshevik party had another great burden - to turn Russia into a Marxist state. Lenin isolated the majority of Russia in 1917 by forming many decrees and taking various actions, mostly ruled by ideology, for example, censorship, he took away freedom of speech from every non-Bolshevik party. These actions were all during the first of Lenin's economy policies - State Capitalism. This policy wasn't as ideological as the New Economic Policy (NEP) introduced in 1921 where although economic control was relaxed, political control was tightened, but it was a start. ...read more.

By 1923 the NEP was responsible for 3/4s of all retail trade and in 1926 the economy had almost regained the production rates of 1913. However, the economic policy which without doubt caused the most opposition was War Communism. Every single group turned against Lenin, even including people from his own, towards the end of war communism. Lenin used oppressive and violent tactics to exert control over Russia and the least popular technique was grain requisitioning. He turned the peasants against him almost instantly by sending the Cheka to forcefully take their grain to sell. The peasants resisted by producing the bare minimum, this gradually led to inflation, then famine. 1/5 people died from starvation. By October 1920 the rouble was worth 1% of its 1917 value. ...read more.

Overall, the most successful economic policy was NEP, even though some saw it as disloyalty because they thought some kulaks were exploiting poorer peasants the majority was happy and it was an essential step for Lenin to take. The economy improved greatly because of the NEP, this is shown by the grain harvest rates, in 1921, the end of war communism, 37.6 million tons were produced, and then 4 years into the NEP this doubled to 72.5 million tons. War Communism was such a failure because Lenin used forceful and suppressive tactics which reminded Russia of tsarist times which they had fought for so long to be rid of. Lenin turned the people against him and gained many enemies. Yagmur Ekici ...read more.