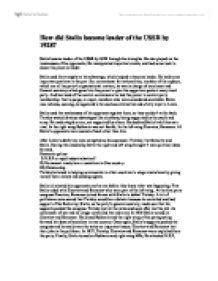 How did Stalin become leader of the USSR by 1928?

How did Stalin become leader of the USSR by 1928? Stalin became leader of the USSR by 1928 through his strengths. He also played on the weaknesses of his opponents; He manipulated important events, and had some luck to secure his place as leader. Stalin used his strengths to his advantage, which helped to become leader. He held some important positions in the part like: commnissar for nationalities, member of the orgbura, which ran all the party's organisational matters, he was in charge of enrolment and General secretary which gave him the power to give his supporters posts at every level party. And has head of the control commission he had the power to control party membership- that is purge, or expel, members who were considered unreliable. ...read more.

After Lenin's death two men competed as his successor: Trotsky- the favourite and Stalin. During this leadership battle the right and left wing brought 3 main political ideas forward. Economic policy- I) N.E.P or rapid industrialisation? II) Permanent revolution or socialism in One country III) Dictatorship Trotsky believed in helping communists in other countries to stage revolutions by giving money them money and sending agents. Stalin eliminated his opponents one by one before they knew what was happening. First Stalin sided with Zinoviev and Kamenev who were part of the left wing. At the first party congress Zinoviev, Kamenev joined forces with Stalin to defeat Trotsky. A lot of politicians were scared that Trotsky would be a dictator because he contolled and had support of the Red army. ...read more.

Finally, Stalin turned on Bukharin and right-wing MPs, He attacked N.E.P, which they suopperted and he had them removed from their pots. In 1929 Stalin celebrated his 50th birthday as the undisputed leader of the USSR. Stalin had a lot of luck. Svrd'ov Lenin's heir died paving the way for a new leader to emerge. Stalin's political carrer was almost over when Lenin's testament was given to the cenrtsl commission. Zinoviev and Kamenev urgeg them not to publish it to the public as it contained bad information about them as well as stalin. Stalin gained the first advantage over Trotsky at Lenin's funeral. Trotsky was ill and Stalin tricked him into not coming by giving him the wrong date. This severly damaged Trotsky's repuation and political prestiage. Stalin made most of the funeral, setting himself up as Lenin's disciple, the person who would carry on lenin's work. ...read more.