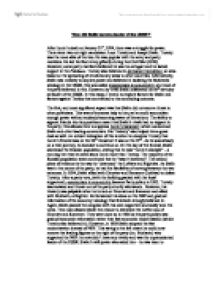 'How did Stalin become leader of the USSR?'

'How did Stalin become leader of the USSR?' After Lenin's death on January 21st, 1924, there was a struggle for power. There were two out-right candidates: Leon Trotsky and Joseph Stalin. Trotsky was the more able of the two. He was popular with the army and party members. He led the Red Army giftedly during the Civil War (1918). However, some party members believed he was too arrogant and he lacked support in the Politburo. Trotsky also believed in permanent revolution: an idea based on the spreading of revolutionary ideas to other countries. Alternatively, Stalin was unlikely to acquire power and believed in isolating the Bolshevik ideology in the USSR, this was called Communism in one country, and most of the party believed in this. However, by 1930 Stalin celebrated his 50th birthday as leader of the USSR. ...read more.

The majority of the Russian population were convinced that he "wasn't bothered". The second piece of evidence is the way he 'destroyed' the Leftists and Rightists. As Stalin was in the centre of the party, he had the flexibility of moving between the two extremes. In 1924, Stalin allied with Zinoviev and Kamenev (Leftists) to defeat Trotsky. After a party vote, (with the building packed with his loyal supporters), communism in one country became Party policy in 1925. Trotsky was isolated and thrown out of the party shortly afterwards. However, his trickery was palpable when he turned on Zinoviev and Kamenev and allied with Bukharin, a Rightist. He forwarded his ideas on the NEP and gradual reformation of the economy: ideology that Bukharin strongly believed in. Again, Stalin packed the congress with his own supporters and easily won the votes. ...read more.

The first impeding factor was his fervent belief that public relations 'were a waste of time'. This further fractured his relationship with the Russian population and imminently ended all aspirations of becoming leader as most people at this point distrusted him. His arrogance also mired his struggle for leadership. This is apparent when he was told (by Stalin) that the funeral of Lenin was on the 26th rather than on the 27th. This, however, should not have stopped him to attempt to return to Petrograd to endeavour to witness the funeral. As it happened, he didn't and Stalin made his march on to becoming leader of the USSR. The most important factor, nevertheless, to him failing to gain the leadership of USSR was that he underestimated Stalin. In doing so, he had become ignorant of the potential dangers that were to approach him. Undoubtedly, this made him unprepared for his dismissal as a party member, his exile to Siberia and finally his exile from the USSR. ...read more.